The upcoming Joker Pro slot by NetEnt is going to be the first slot from the popular software providers to be released for 2017. The new slot follows the same tradition of NetEnt slots for having a straightforward gameplay with stylish graphics. NetEnt’s Joker Pro slot will be available on Feb. 9.

There are several reasons slots enthusiasts should give the game a try once it comes out in top Bitcoin casinos. Here are five factors that make this new NetEnt slot a must-play.

Joker Pro’s graphics are as colorful and flashy as any new slot games. Some of the animation in the game stands out and easily makes this game one of the top games from NetEnt. One example is the fire effect of the wild symbol that flickers to life. When a player activates the bonus and obtains a big win, the reels zoom out to display the neon wall in the background that will show a number of symbols and change colors. These details make every win memorable for players. 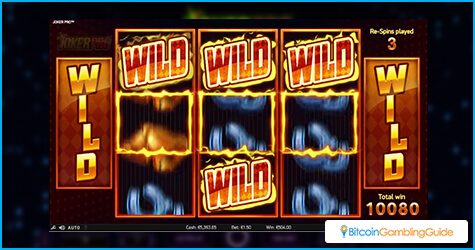 The Jester’s hat symbol or the scatter symbol of the game is the main attraction of Joker Pro. The symbol appears on the second, third, and fourth reels. When one or more of them appear, the re-spin mode activates.

Another feature of Joker Pro is the Hot Spot win. A Hot Spot win occurs when a player can get a scatter symbol on three Hot Spot positions. These three positions are the middle of the third, fourth, and fifth reels. Getting a Hot Spot win can give a player 1,000 times his bet. This feature can occur in the normal mode of the game as well as in the re-spin mode. 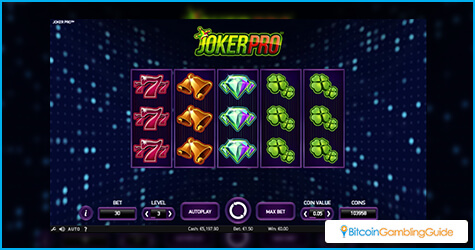 NetEnt is one of the leading game content makers in the industry. They have made a large number of games ever since their launch in 1996 and released several new NetEnt slots last year. The development team’s experience and skills allow them to create some of the best games anyone can play in an online casino. A couple of examples of these are Gonzo’s Quest slot and Starburst slot. Both games have a cult following in many online casinos.

NetEnt slots are in many popular Bitcoin casinos already. Bitcoin is perfect for online betting is best used to play online slot games. Players can easily make Bitcoin deposits or withdrawals quickly and with fewer hassles. The digital currency also allows anyone to play anonymously.

Some of the NetEnt Bitcoin sites that will soon have Joker Pro slot in the library after its release are mBit Casino and BetChain Casino.