Formula One fans are looking forward to the final race of the season. Abu Dhabi will be the venue where the 2016 F1 championship will be decided. Nico Rosberg maintains a lead over Lewis Hamilton, but the outcome of the final race is anything but certain. This is an exciting opportunity for Bitcoin bettors, as gambling platforms offer attractive odds for the showdown in Abu Dhabi Grand Prix.

Will it be Rosberg or Hamilton?

One thing is for sure: the 2016 Formula One champion will be one of the two Mercedes drivers. Nico Rosberg has carved out a lead over teammate Lewis Hamilton over the past few races, and does not even need a win to clinch the title. Hamilton, on the other hand, had no other option than to win the race, and hope Rosberg does not finish in the top three. 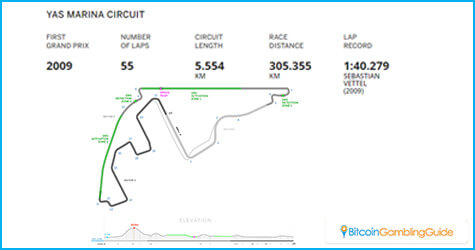 A 12-point lead separates both drivers, which makes the outcome of the race all the more important. Lewis Hamilton cannot control his own destiny by any means, other than by giving it his all. Various permutations have been outlined on the official Formula One website, with the odds clearly favoring Rosberg to win the title this year.

Lewis Hamilton recently stated the following during a press conference:

“I’ve had 31 wins in four years with this team so far, which is just crazy. I’m so thankful for the great opportunity these guys have given me. We’re continuing to make history together. It’s not been a perfect season and I’m faced with pretty impossible odds no matter what I do this weekend.”

But the final race of the season may throw a monkey wrench into the German driver’s aspirations. Hamilton has a better overall record on the circuit—both in terms of poles and victories—yet Rosberg took the pole and the race victory last year. Statistics will mean very little, as it is impossible to predict the outcome of any Formula One race. Mechanical trouble could strike either driver, and turn the championship on its head.

While the focus shifts toward crowning the 2016 Formula One champion, there are other stakes at odds as well. Both drivers have won nine races each this season, and the Abu Dhabi Grand Prix may tip the scales. This is only a footnote in the ongoing championship battle, but an important factor nonetheless.

It is safe to say this will be a very thrilling race, even for people who may not have an immediate interest in Formula One. Deciding the title in the final race of the season—and perhaps even in the final corner on the last lap—is what brings such great excitement to this sport. Bitcoin sports betting to take special interest in this event, as the odds are quite appealing.

Cryptocurrency enthusiasts have a plethora of betting options for the Abu Dhabi Grand Prix through the SportsBet.io platform. The ongoing head-to-head battles between drivers are always a great opportunity for successful betting strategies. Interestingly enough, SportsBet seems to favor Lewis Hamilton finishing ahead of Nico Rosberg. Odds are in favor of Hamilton at 1.45, compared to Rosberg’s 2.65.  Meanwhile, odds for the Drivers Championship 2016 Winner favor Rosberg at 1.20 over Hamilton’s 4.40 by quite a margin. 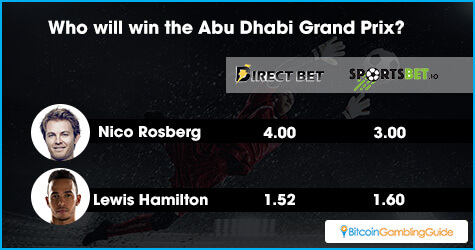 Another popular Bitcoin betting platform for Formula 1 enthusiasts is DirectBet. Similar to the SportsBet.io odds, they see Lewis Hamilton win the race at 1.53 odds. Since Rosberg does not have to score a win to clinch the title, it is expected he will play it safe. The championship seemingly rests with Rosberg already, as his 1.21 odds are far better compared to Hamilton’s 4.3 odds. Touching upon which driver will have the most race wins, they seemingly favor Nico Rosberg, despite Lewis Hamilton being the clear favorite to win the race, based on their own odds.