Last Sunday saw the end of Stage 15 of the Tour de France, a 160 kilometer stage that went all over the Jura Mountains. Starting from Bourg en Bresse to Culo, this part of the race was a constant climb after another as the racers hoped to win this stage of this race.

This particular stage of the race is filled nameless climbs along with more noteworthy ones like Col du Berthiand, Col du Sappel, Col de Pisseloup, Col de la Rochette and Col du Grand Colombier. Around 60 kilometers of 160 kilometer stage is climbing up the mountainside. This was surely a tough part of the race with several cyclists crashing as they descended at fast speeds.

The big winners for this particular stage are Chris Froome, who maintained his time lead and the yellow jersey, and Jarlinson Pantano, who managed to win this stage of the tournament.

A splash of color

With several stages left, some might want to star placing wagers on sportsbooks like BetBaller and Nitrogen Sports. For sports bettors who want to get in on the action, they should pay attention to the people who are wearing special jerseys right now. Chris Froome holds the yellow jersey, while Peter Sagan holds the green jersey, his teammate Rafal Majka has the polka-dot jersey, and Adam Yates holds the white jersey. 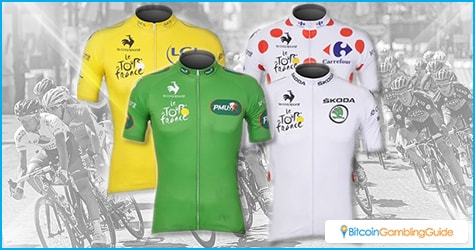 These jerseys are important because they are like markers on those cyclists who are doing well. Only the cyclist who meets the requirements for the Tour de France jersey can wear the color; there is only one cyclist in the race who does so. The yellow jersey means that the wearer is the overall time leader, which means he is currently leading the race. The green jersey is for those who have the highest total points. This is earned by what position they finish the stage. First placers earn the most points and the points decrease for each successive finisher.

The polka dot jersey is awarded to the King of the Mountains. This is determined by the number of points they receive when they hit the top of a climb, similar to how the green jersey’s points are determined. Finally, there is the white jersey. It has the same qualification as the yellow jersey, but is awarded to young riders only, which means they have to be younger than 25 years old on January 1 of the year of the Tour.

Looking to the future

Stage 16 will take the Tour de France into Switzerland. Starting in Moirans-en-Montagne, at the foot of the Jura Mountains, the stage goes directly into Switzerland and end in Berne. After Stage 15’s mountainous challenge, this promises to be a less strenuous ride as the cyclists race across the valleys of Jura. However, there is one climb in the 206-km stage near the end it may up end various plans. 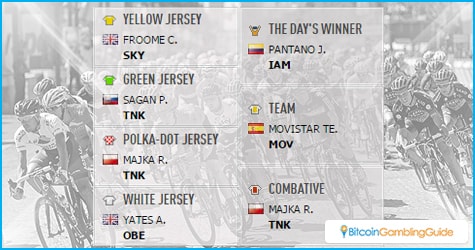 Chris Froome currently wears the yellow jersey but Peter Sagan and Fabian Cancellara are looking to take it away from him this round. The two of them are the big betting favorites for this stage and it will be interesting to see their performance.