Tour de France will start its first stage on July 2 and the cycling world will be watching. A month-long cycling race, this is the time of the year when professional cycling manages to catch the eye of the world.

Most of the time, a cycling race does not manage to get a mention on the news, but the Tour de France is an international event that brings together the top cyclists in the world for an epic race. It accounts for 80 percent of the TV exposure that cycling gets and that is big business. A lot of people are already making predictions on the ultimate winner, while different online sportsbooks are also looking toward generating revenue by offering odds for the race.

For newcomers interested in placing bets on the Tour de France, they will need to have a bit of background. The race itself is more than a hundred years old, with the first Tour being run in 1903. Since then, it has been held annually except for during the two World Wars. It is a cultural touchstone and is a major event for the cycling world. 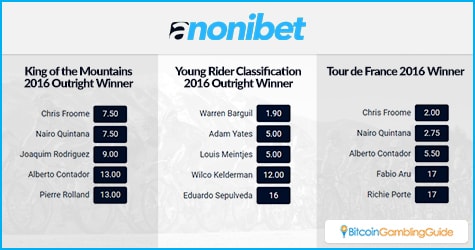 Physically, this year’s Tour de France is going to be challenging. There will be nine flat stages and nine mountain stages to go through. Cyclists will know how much of a challenge mountains are when riding a bike. In addition, there will be two time-trial stages and a single hilly stage. There will also be two rest days for the teams to recuperate from the grueling schedule.

For those who are watching the Tour de France the first time, the fact that teams are participating can be confusing. When people think of bike races, they often think of a single winner. For the Tour de France, though, with its 21 stages, teams of nine riders participate so as to spread the burden around.

Each stage has its own winner and awards. This is why some teams focus on just winning one or two. This is enough to get the attention of the press and sponsors. The ultimate winner of the Tour de France is the cyclists with the lowest total riding time across all 21 stages, so some teams try to win via strategy, accumulating time in one stage while recovering in another.

The predictions and wagers

With the many cyclists participating, it can be hard to make predictions. However, some experts have already made some. Federico Bahamontes, a Spanish Tour de France veteran, supports his countryman, Alberto Contador. Contador has already won the race three times, enough to prove his prowess. Bahamontes pointed out the hot weather that France is currently experiencing can influence his chances, with Contador being used to the heat. 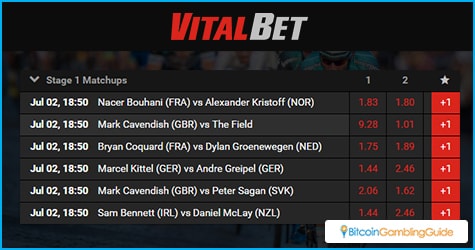 Other experts favor Chris Froome, the recent winner of the Critérium du Dauphiné, as one to look out for. Another favorite is Nairo Quintana, the Colombian who may finally break the European dominance in the Tour de France.

For those interested, right now only two Bitcoin sportsbooks are offering odds on the race. Anonibet has Froome as the clear favorite, with Quintana a close second. VitalBet is of the same belief, but offers higher odds for betting.

With these odds, July will be an interesting month for bicycle racing as the Tour de France rides across the countryside.