The new NBA season is in full swing, and there will be plenty of Bitcoin gambling opportunities on the horizon. Although every season has its surprises, analysts predict a rather straightforward picture for both the Eastern and Western conferences. Things are shaping up nicely for now, and the air is filled with anticipation as fans look forward to crowning a new NBA champion.

A look ahead at the Eastern Conference

Contrary to what a lot of people might expect, the Chicago Bulls may not even make a big impact on the Eastern Conference this year. Even though they added Dwayne Wade to their ranks, they let go of Derrick Rose, Pau Gasol, and Joakim Noah. Three key elements of the team are gone, and adjusting to a new system with new team members will take up a lot of time. Moreover, there’s a new coach on the sidelines, and coordination will be key. Although the Bulls may surprise the world, it is unlikely they will have a big season this year. 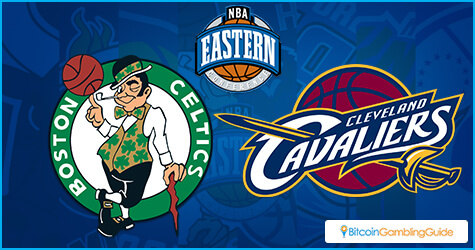 The Miami Heat finds themselves in a bit of a pickle as well. With Dwayne Wade leaving, and Chris Bosh’s still dealing with blood clot issues, things are not looking positive. At the same time, there is a lot of young blood on the bench, who will need to find ways to address the challenges that lie ahead. The loyal fan base will be called upon more than once, and it may be up to the fans’ involvement to get this team to the playoffs.

On the upside, there’s the Boston Celtics, who have impressed many NBA fans in recent years. Although there is no “big star” on the roster for now, they have plenty of talented players. Barring any major injuries, the Celtics could surprise a lot of people this year. However, they are not the favorites for the Eastern Conference by any means.

The role of “favorite” goes to no other than the Cleveland Cavaliers. With no significant team changes to speak of, they can pick up where they left off last season. The point guard position is still a bit of an issue, but the overall team depth should make up for this potential issue. Analysts expect the Cavs to make it to the Conference finals with relative ease this year.

Western Conference has some exciting candidates

Even though very few people had the Denver Nuggets on their 2015-2016 shortlist, the team did surprisingly well. With a very young team, as well as veteran talents, there is a good balance between enthusiasm and experience. Some of these youngsters may be on the verge of breaking out, and that may happen as early as this year.

Bitcoin bettors who like high-scoring games will want to keep an eye on the Houston Rockets. Coach Mike D’Antoni wants to ensure that his team is one of the highest-scoring ones in the conference by the end of this year. Although the team may lack the physical presence to be a main force in the playoffs, a good work ethic will go a long way. 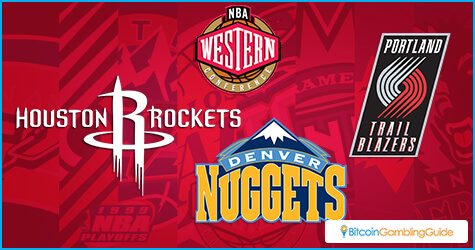 Fans who kept close tabs on the previous season may have noticed the rise in power of the Portland Trailblazers. Although one “superb” season is nothing out of the ordinary, it is expected their good run will carry over to this season. If they can improve their defense, the fan base will continue to grow, and a Western Conference playoff spot will be on the horizon.

DirectBet has listed some interesting—albeit limited—NBA betting odds for the upcoming season. The Golden State Warriors seem to be the clear favorites to become NBA Champions, although one should never discount any of the other teams. The Eastern Conference winner’s title seems to go between Cleveland and Boston, albeit no Western Conference odds were provided yet.