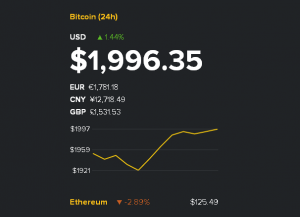 As of this moment, one bitcoin is trading at about $1996 but no one is expecting that figure to persist for much longer. Either the price will drop to around $1900 as it encounters resistance and rallies back at its previous strong point, or the inevitable will occur in the next couple of hours – BTC will break the $2k threshold and manage to double in value in 2017.

For most in the bitcoin community, the move up will be a symbolic grand victory that is a clear proof that many large entities now see BTC as a legitimate alternative to the traditional currencies. This shift already occurred in Japan but took place in a very subtle manner. It came without big headlines about drastic legislative changes or anything like that and instead simply took a form of a huge influx of funds into the cryptocurrency.

Much of this money has come from larger financial and business entities, following the trail of many private billionaires who began acquiring digital currency. Aside from the bitcoin rally, ether also saw major growth when it comes to its price, along with other altcoin digital currencies.

But, most of the attention is focused on the bitcoin as the main contender for the strongest global digital currency in the decade to come. As it pushes through the 2k point in the very near future, what can be expected from the rest of the financial area, but also the entire global society as a reaction to this accomplishment?

The Market Cap will Grow

Regardless of the price at any given point in time, the market value of the entire blockchain-based digital currencies will only grow in value. There has been a long process leading up to this of the adjacent markets feeling their way into this area, slowly but surely investing more and more in BTC and recently, ether as well.

Now, the value of the whole market with altcoins, zcash and any other cryptocurrency out there is over $60 billion, which is an impressive price. A bitcoin price that goes beyond $2000 will draw even more money in, even if it is unstable.

Of course, this brings many to question what will then become of the same digital currency. At some point, venture capital bitcoin investments will appear on the market and this will also signify a big shift. While there is no doubt that these will not be commonplace for some time to come, the upcoming period will definitely provide a large field for testing this concept.

As time goes by, the focus of the blockchain community regularly goes on and off the phenomena of end user acquisition for the purpose of using digital currencies. At the starting phase, the process of getting as many ordinary users as possible on the platform, whether it was bitcoin or some other blockchain, was seen as paramount.

In the meantime, big business entered the frame and recently, it has more or less solely pushed the price of BTC to its record levels where it is currently at. Once again, riding on this success, many sought to establish the idea that bitcoin in on the verge of widespread popularity. In other words, it is only a matter of time (presumably short) until it becomes a household thing.

But, there are many historical factors that place this inside of the “could be” category, not “any moment now”. The problem is that BTC provides a range of benefits that huge majority of the population simply does not need or appreciate. The paralleled of the PayPal scenario is a good weather bell phenomena, even though many (most likely, wrongly) perceive it as an indicator of the future BTC movement as a regular payment option.

The problem is that while PayPal provided an alternative to a slower and more complicated banking card transaction, bitcoin wallets do not do the same for PayPal. Anonymity and steering clear of the traditional financial sector is not something most ordinary users want in their lives.

With this factor, it would come as little surprise if in a decade from now bitcoin market worth was much bigger what it is today, while its user base remained still relatively small (nowhere near what PayPal operates now as its pool of users).

In the perception of global political leaders, bitcoin is one of those phenomena you simply do not want inside of their playing field. It is decentralized, global and unconnected to all parts of the standard financial service. At the same time, the paranoid mindset sees it as something that is still either controlled by someone or open for an insertion of this control, which is untrue, but still prevalent in the mind of the political elites.

That is the reason why EU is looking to set a law requiring all digital wallets to be connected to the identity of their holders or why China is cracking down on its BTC exchanges. In the coming years, this will not change for the big nations of the world and the same mentality will more or less remain in place, even if the legislature does catch up with the clear need to recognize bitcoin.

For all the lobbying and PR efforts, there will be no major change in this regard for the bitcoin community, regardless of their success. Bitcoin does not have a person or persons who can make a backroom deal with a political entity. This makes it something to be slightly feared and only marginally understood by the political establishment.

The only big global political organization that seems to be plotting a new course is the UN. As their recent WFP venture shows, this organization is looking to both use the blockchain system, but also employ the current cryptocurrencies operating in the world.

This is almost certainly the right approach, mainly because it recognizes the realities of the world that will not change overnight. While governments are more than willing to experiment with blockchain, they are still reluctant to see bitcoin or any other digital currency as legitimate FinTech enterprises. There is a strong sense that even a BTC that is stable and costs more than $2k will not change this mentality anytime soon.