BitCasino.io has been going from strength to strength since it first made its debut. Launched in 2014, the licensed and regulated Bitcoin-only gambling site has become a major player in the online gambling scene, and its 2015 performance report is enough proof.

One of the most noticeable BitCasino.io milestones is the fact that from 2014 to 2015, the turnover increased by 1,370%. This resulted in a turnover of more than €50 million before year 2016 began.

Moreover, the biggest win on a single spin is 274 BTC, which is worth over €100,000. Additionally, BitCasino.io has been generous when it comes to winnings. Players have been playing for over €14 million worth of progressive jackpots, which is a large sum when it comes to Bitcoin.

All of these milestones are made possible by the various strategic moves that BitCasino.io has been making since it first entered the online gambling scene. This can be seen in the various mergers and partnerships that it has been arranging. A good example of this is when Bitdraws and Bitcoinbet.eu, along with other casinos, merged with BitCasino.io, which added their clientele to BitCasino’s. 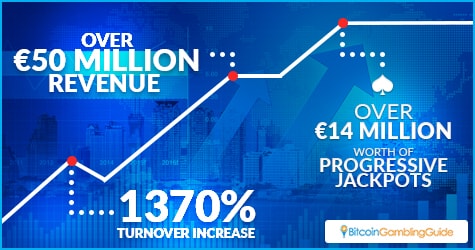 It is not just about adding customers, though. BitCasino.io has also partnered with several software developers to ensure that the site has some of the best games possible. This includes deals with Microgaming, Coingaming.io, Play’n GO, and other industry leaders.

BitCasino.io is also not above innovating, and the integration of a sportsbook proved so. The BitCasino.io sportsbook is currently covering over 60,000 events a month for wagering. Those are a lot of events that people can bet on and the site has been making good money on Bitcoin wagers on these sports. This particular section of BitCasino.io will actually be getting a larger spin-off on Sportsbet.io, due to arrive in June.

“We are also very excited to be launching Sportsbet.io in June 2016 for the UEFA championships in France. Given the success we have had with bitcasino.io, we are confident that it will become the premier sports betting destination for all Bitcoin players across all devices.”

Sports bets are not the only place this Bitcoin casino is making its mark. Live betting with live dealers is a feature that has become a popular one in the online gambling world and BitCasino.io has done its best to deliver in this field. Using live webcasting technology and having beautiful models as its dealers, the live dealer portion of the site continues to be frequented by players across the world.

Better for the customers

These moves have resulted in a better environment for the players on the site. When a player drops by BitCasino.io, they can be assured of a positive gaming experience. With over 800 games in its library, there is sure to be a game that can tickle anyone’s fancy. 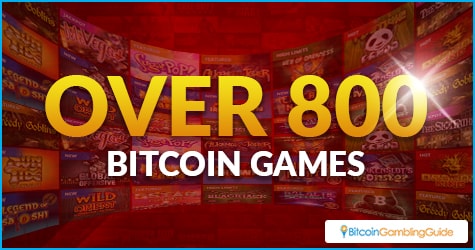 It also does not hurt that BitCasino.io delivers a convenient gaming experience. As 2015 report reveals, the average time for a payout is just 2.5 minutes. Compared to fiat currency withdrawals that can take days, Bitcoin transactions are processed in a blink of an eye. Additionally, there are no chargebacks or payment processing costs to pay.

BitCasino.io has proven itself on the market, and it aims to keep doing so in the future. Players should expect more innovations and changes for the better for the Bitcoin casino and sportsbook as the dedication of BitCasino.io continues to strengthen.