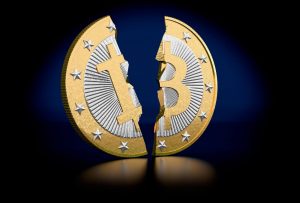 The single most important moment in the history of bitcoin blockchain began earlier today on August 1st, 2017 with the process of forking starting the transformation from a single network into two different cryptocurrencies. After years of trying to find common ground, a segment of the miner and developer community is going to split off from the BTC P2P network and begin their one alternative called bitcoin cash.

As of now, the new digital currency has not been created but the process that will split the network is well under way. Because of this, many eyes are following the market reaction to this, as well as the technical impact that this will have, especially related to those coins that will, at least in theory, coexist on both networks at some point.

Here is a breakdown of the most important facts about the process and what lasting effect it can have not just on this particular digital currency, but the entire development ecosystem of blockchain cryptocurrencies.

The actual split began when a group of miners backing bitcoin cash started to operate different software on their mining rigs starting with August 1st. The same software is about to create a competing digital currency that was named earlier bitcoin cash.

The reason for this lies in the very old and very painful issue in the bitcoin community – the size of the individual block of data being used by the network. As the amount of transaction kept on growing, the problem of using 1MB of data as the block size started to slow down the same procedures, leading to longer wait time between the transaction being made and verified by the blockchain.

Now, bitcoin cash plans to deal with the problem by raising the size of the transaction blog significantly while removing other capacity upgrades. This is seen by the supporters of bitcoin cash as a clearly superior alternative to all current scaling efforts. The rest of the network placed its backing behind the SegWit2x adaptation of the current network.

Even though the camps have been clearly defined and the crowd pushing for the new digital currency has a path forward, the split is still nowhere near its completion. While the divergence began around 12 p.m. UTC, the bitcoin cash has to process a block that is larger than 1MB for the split to be sealed.

So far, the same has not occurred but it is only a question of time – most experts agree that hours, not days will take for the same moment to be reached. At the same time, the original bitcoin blockchain continues to work without any issues.

Technically, if the new larger block is not found, the bitcoin cash initiative could be stopped in its tracks before it can proceed any further. However, this alternative is not as clear for even those who have followed the forking debate in great detail. The most recent piece of news suggests that bitcoin cash managed to mine its first block, making the split official, but the confirmation of the same event will likely take a bit more.

Market Reaction to the Forking

Bitcoin price reached $2,925 today, apparently unabated by the same process of forking. The price fell during the day for about 5% and the instability will continue well into August 2nd and beyond, depending on the success (or failure) of bitcoin cash.

A big advantage that comes with the event is the fact that the traders have had ample time to prepare themselves for this moment. As millions use to trade with bitcoin, gamble online at BTC casinos and do many more similar things, the volume of transaction is constantly rising. But, at the same time, the same volume acts as a safety barrier for any truly major shift in the price and the traders are well aware of this.

As of now, bitcoin cash, known under BCC or BCH is trading at about $380 and the price is surely not going to stay in this range for long. Instead, a quick rise or fall can be expected before the first relatively stable price is attained before the end of August.

Psychological Effect of the Split

Aside from the market impact and the technical issue, a range of debates has been taking place about the issue of the psychological repercussions of the split on the digital currency domain. The arguments from both sides are valid – the pro-split camp underlined the advantages of having two digital currencies that are running on a basically same type of blockchain. This is clearly a unique moment and something that, from the tech perspective, provide a unique benefit to both BTC and BCC.

The anti-split camp, however, argued that the loss of security in the network will be a lot more relevant in the months and years to come that any short-term or tech benefit it might come from it. Currently, the markets have not shared this sentiment and at least the initial split did not see any meteoric fall of the BTC value. Some have even jokingly noticed earlier that the price of bitcoin is crashing in the opposite direction.

But, as the history of the digital currencies showed many times before, the fortunes can change in a blink of an eye and the same psychological factor can still steer up the uncertainty that would lead to mass sell-off. For better or worse, the anti-split camp is right that the forking in an unprecedented event and these rarely benefit any business domain as a whole.

The Future of BCC

There is a sense that the problems with ether and ICOs came as a nice reminder of the instability of digital currencies, which is why currently there are no heavy changes with the bitcoin network market reaction. But, at the same time, it is hard not to recognize that traders are simply biding their time, confident that the networks will hold steadfast through the split.

Once the same is completed, the aftershocks that come after still might hit the markets and either bring the values down or boost them further. In any case, it is difficult not to see the fates of both BTC and BCC as very interconnected in the short-term, regardless of the split that technically separated them.