Integrating Bitcoin into the banking options available to its players earlier this year proved to be a great move for BetOnline.ag as the digital currency becomes the site’s most popular payment method second to credit cards.

With only months after Bitcoin was first introduced to its players, the Panama-licensed online gaming giant continues to witness more traction in terms of Bitcoin deposits and payouts for the past months, emphasizing the beneficial features Bitcoin has over the conventional payment options like bank transfers.

As Bitcoin continues to gain popularity among the registered members, it becomes apparent that the use of the digital currency in online gaming opens a myriad of advantages that further improves the overall performance and services offered by BetOnline.ag.

Over the years BetOnline.ag has been in the business, it provides the online betting community with several ways to play and win, whether in casino games, poker tournaments, horse races, sports betting, and skill games.

Add Bitcoin to the top performance of the featured gambling services and the overall experience of the BetOnline.ag account holders would have largely improved. This is the case at present. 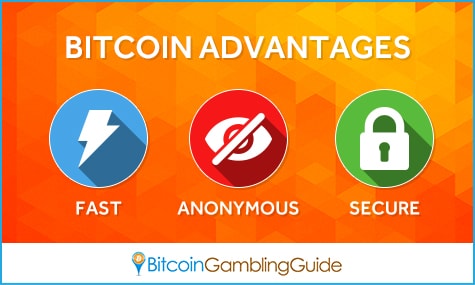 With Bitcoin on board, the banking system has never been player-friendlier as compared to gambling sites that exclusively accept fiat payments. Bitcoin deposits are sent directly to the official wallet address and will undergo a complete process that normally takes 24 hours.

Collecting the winnings, on the other hand, are done within 48 hours—a significant improvement from the longer waiting period still observed in other online casinos, sportsbooks, and poker rooms.

Moreover, players can benefit from the anonymous transactions via Bitcoin, as well as the wider transaction limits that enable all kinds of players to follow their betting style based on their bankroll.

Amid the clear advantages of integrating Bitcoin, the seasoned gambling site views the connection between Bitcoin users and the online betting players to be complementing each other.

“Initially, we were surprised how popular Bitcoins were at BetOnline.ag. However, after thinking about it a little more, there is such a natural fit between folks that trade Bitcoins and bet online; the crossover is quite significant.”

He added that there is striking similarity with the concept of trading Bitcoin for profits and aiming to collect top prizes in online games, citing this as a primary reason behind the increasing adoption of the cryptocurrency:

“With each passing week, more and more players are investigating and educating themselves on Bitcoins, not only as a means to fund their BetOnline account, but to also trade for a profit.”

The promotions and bonuses that were initially offered to real-money players only function as another factor that makes Bitcoin betting more attractive. 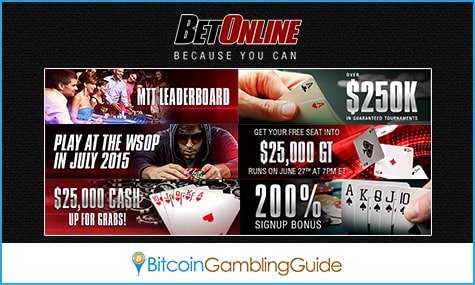 Popular among the BetOnline.ag Bitcoin players is its US-facing poker room that boasts tables full of players with different skill levels. Guaranteed tournaments, freerolls, and numerous ring games are offered, along with the attractive poker incentives that are guaranteed to catch the attention of Bitcoin poker aficionados.

New poker players also have the privilege to enjoy the 200-percent bonus on deposits between $50 and $1,000.

Other than the poker tournaments, the Bitcoin sports betting services and casino games up for grabs on this site can be acquired upon signing up for an account and placing deposits via Bitcoin or other fiat deposit methods. The Bitcoin casino bonus deals like the Welcome Bonus, the Slots Bonus, and even the Reload Bonus are open to all kind of players on BetOnline.ag.