Ignition Poker is bringing back the much awaited Black Diamond Poker Open next Sunday. This event will have guaranteed total prize money of $3 million.

The Poker Open will consist of 147 tournaments. These events will run from March 12 to April 10. Anyone interested in taking a shot for large payouts of any tournaments still has time to book a place.

What poker players should expect

Ignition Poker holds the sixth Black Diamond Poker Open, which was previously held on Bodog and Bovada. Because this is the sixth anniversary of the event, everything will have the theme of the number six. For example, the prices of the tournaments will be at $6,000 or $66,000. All tournaments will begin at six past an hour. 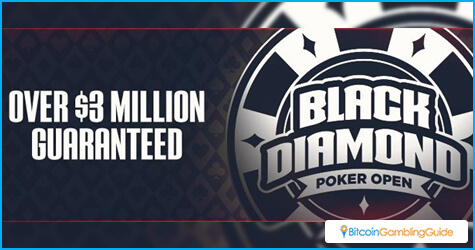 The main event of the Poker Open to be held at Ignition Casino is still going to have a large prize amount than most of the tournaments. This event will offer 10 percent of the total prize money, which is a guaranteed $300,000 prize pool. The main event will take place on April 9.

This Poker Open is going to include 36 Omaha tournaments that have various formats. These events include the usual standard and fixed pot limit games. One unusual event on April 12 will be the no limit Hi/Lo Omaha game.

Black Diamond Poker Open is not only for the high rollers. There are going to be mini-tournaments throughout the Poker Open. These are small versions of the scheduled tournaments for a certain day. These mini tournaments will have a small buy-in entry and will be perfect for players with a small bankroll.

All US players at the Ignition Poker can join this year’s Black Diamond Poker Open. Any player who wants to take a shot at any of the massive prize pools can create fiat or Bitcoin poker account at Ignition Casino. All new players are eligible for a first deposit bonus of 100 percent up to $1,000. This bonus has a wagering requirement of 25 times the deposit and bonus amount. The poker room, which Ignition Casino acquired from Bovada, accepts credit cards and wire transfer. Bitcoin owners can also deposit and make wagers with the cryptocurrency.