The Bitcoin price slumped to a record low in January, but it is now showing signs of optimism as it spiked to about a $270 closing price yesterday.

Bitcoin has been trading against the US dollar within the $200 to $250 range for several weeks already. The past few days, however, marked significant improvements that are evident in its gradual but steady increase. In fact, the digital currency’s value soared by about 14 percent since its closing price on Feb. 23.

According to analysts and speculators, this progress can be attributed to different factors. Several events happened during the past days, and these developments are responsible for the positive state the Bitcoin price is in at present.

What pushed Bitcoin to increase its value?

The approval of the Bitcoin Investment Trust to be traded on public markets in the US is coined to be one of the major catalysts behind the optimism on the Bitcoin charts. Merchants adopting the digital currency are also believed to contribute to this momentum, as well as the relatively hopeful response of the Bank of England toward the cryptocurrency’s potential as a payment innovation.

Other individuals and organizations who closely monitor Bitcoin’s performance on the market believe that there are still other reasons that can explain the recent price jump. 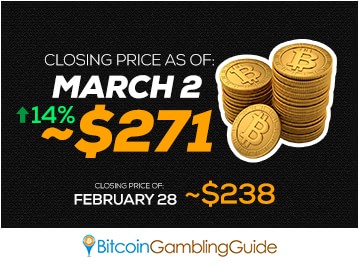 Retail and other markets that run on Bitcoin are bound to benefit from this long-awaited price increase. Included here is the Bitcoin gambling industry.

While some may argue that the digital currency’s value should not have a large bearing when it comes to online betting, this positive jump still presents the online activity to be inviting and rewarding.

The Bitcoin winnings collected by players from playing in a Bitcoin casino can be exchanged for higher values when the Bitcoin price is heading north of the chart. This alone can already serve as an encouragement for old and new bettors to place as many bets as they can afford to use in order to score more payouts.

Even in the unfortunate event that the Bitcoin price slumps again, this should not largely affect the industry. After all, the funds allotted in gambling should reflect the amount the bettors can wholeheartedly lose.

The recent jump in the value of Bitcoin sparked speculations that more price increases may happen in the coming weeks or months. More gains are welcomed to occur any time soon in order to relive the glory days when 1 BTC costs more than $1,000.

Moreover, market watchers see this as a promising sign that the Bitcoin price will finally reach a point where more merchants will be attracted to adopt the digital currency.

Despite the rise and fall of the Bitcoin price in online gambling, the market’s doors remain to be open to everyone who wishes to wager and experience revolutionary features and services unique bitcoins gambling online can offer.