To date, the majority of the population, especially the ones in the economic sector, still sees Bitcoin as a commodity rather than a full-on asset. Perhaps this is one major factor that contributes to why this cryptocurrency is not yet fully recognized as a legitimate currency by the mainstream society.

However, the recent negativity that swarmed Wall Street may be a significant sign for economists and business professionals to reconsider their stand on Bitcoin.

Just days ago, a series of unexpected events happened in the stock market that took investors by storm. Last Monday and Tuesday, stable markets from around the world experienced a shocking fall in price by up to 10 percent.

The Wall Street fallout and Bitcoin

This global market meltdown is extremely unexpected and has stripped massive amounts of dollars off giant multinationals that seem to show great stability before the unanticipated event occurred.

According to the latest stock market statistics, the most affected stocks in the US were Facebook and Apple, losing 14 percent and 11 percent, respectively. Fortunately, both entities rallied back into positive numbers soon after the fall.

A report by Rupert Neate of The Guardian stated:

“US stock markets collapsed on Monday continuing a global stock market rout that has wiped hundreds of billions of dollars off shares across the world. The Dow Jones Industrial Average dropped by 6.4%, the S&P 500 dropped 4%, and the Nasdaq lost 8.5% raising fears that a fresh tech bubble has burst. The drops followed already-heavy falls last week.”

Moreover, The Guardian has released a vivid summary of the events that happened on the stock market’s ill-fated crash. As per the British newspaper, this event gave a detrimental blow to the US stock market and is deemed to be the biggest sell-off in four years.

In addition, the European stock market was also not spared by this downfall and has suffered its worst days in economic dating back 2011.

China, on the other hand, experienced the nastiest hit, having the Shanghai composite index drop 8.5 percent in the biggest sell-off since 2007.

Considering these catastrophic events, several professionals and entrepreneurs are hastily searching for bright alternatives to keep the economic system afloat—Bitcoin is one of the most outstanding options they have in mind. 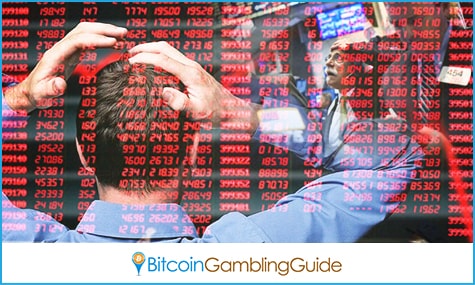 Internet entrepreneur and influencer Kim DotCom—founder of cloud-based service provider Mega and the now seized Megaupload—has publicly made his official stand regarding the usage of cryptocurrency. In fact, he made a provocative announcement via Twitter during the fiasco that was happening alongside the Shanghai index drop.

Subsequent to this online announcement, several of his followers applauded him for having an in-depth understanding of Bitcoin’s capabilities in improving the now shaky economic system.

DotCom emphasized his reason behind Bitcoin’s potential to save the economy on another tweet stating:

Although this is entirely a hunch made by the online influencer, it still can be possible for such scenario to happen, especially with the current economic situation.

Meanwhile the Chinese Bitcoin market continues to advance as its mining and trading sectors maintain the lead globally. 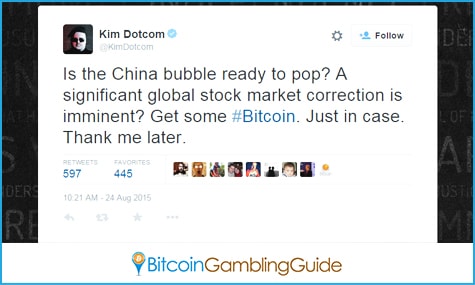 How can Bitcoin really save the economy?

Bitcoin is known to possess volatility when it comes to its selling price. Although this may seem as a disadvantage in the mainstream perspective, this unique trait is now considered to be a significant factor that will keep the global market intact.

As the month draws to its closure, the Bitcoin price has soared to $280, but it plunges back to $230. Nevertheless, this price range comes to show that DotCom’s intuition is more likely to achieve such price hike.

Considering the $1,000 mark is achieved, Bitcoin users can now exchange their cryptocurrencies through a Bitcoin exchange to keep the flow of the cryptocurrency ecosystem going. At the same time, aspiring bitcoiners can now acquire these coins on the said exchanges with the use of their fiat currencies.

If Bitcoin is to be integrated and considered as a legitimate currency, the mainstream market may limit the repercussions of sudden drops or inconsistency since the flow of Bitcoin continues to go, regardless of external factors. Bitcoin amid stock market crash continues to exhibit its capabilities to become the foundation of the next generation’s currency and payment system.

How will this affect the Bitcoin gambling industry? It could be in massive ways imaginable.