BitcoinGG’s private freeroll called ‘BitCoin GamblingGuide MoMoMo PLO Freebuy’ will open on Friday, Oct. 7 at 5 p.m. ET and will be accessible to registered players through the Americas Cardroom lobby.

Online poker enthusiasts looking to join BitcoinGG’s private freeroll simply need to look for the tournament name above, while new players have to sign up at Americas Cardroom and download the software client to access the tournament lobby.

All players must register for the event and enter the unique BitcoinGG password: momomo375. 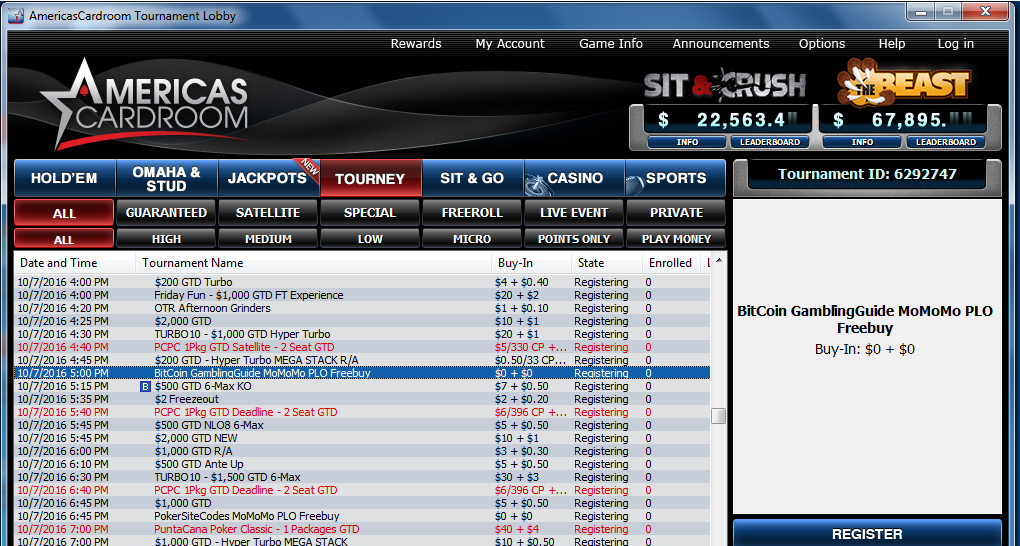 BitcoinGG readers who finish in the top eight each earn a $30+$3 satellite ticket to the 20-seat MoMoMo SS PLO Satellite on Sunday, Oct. 9.

This Super Satellite takes place at 11:35 a.m. ET and will serve as the next stage for the players to advance to the $50,000 GTD MO MO MO PLO Sunday Special later that day at 2 p.m. ET.

Before the players reach the Sunday Special, however, they must do well in BitcoinGG’s exclusive private freeroll. BitCoin GamblingGuide MoMoMo PLO Freebuy has 100 seats available and will give every player 1,500 starting chips at the start of the poker freeroll tournament for 10-minute levels. Late registrations are also available for 12 levels.

The top performing players from the Super Satellite will be awarded with a seat to the $50,000 GTD tournament. The Sunday Special has a buy-in of $200+$15, and it registers the highest GTD pot for Americas Cardroom’s MO MO MO PLO promotion this year.

Both the Super Satellite and the Sunday Special are scheduled on the same day—Sunday—with the $50,000 GTD tournament scheduled at a later time. BitcoinGG readers can make the most of the BitCoin GamblingGuide MoMoMo PLO Freebuy to gain an early lead toward the Sunday Special.

Meanwhile, other than these tourneys, Americas Cardroom has also set up more PLO tournaments for the online Bitcoin poker community.

Americas Cardroom will also be offering a maximum bonus of $100 every day. Each player will earn 10 bonus cash for every 100 hands they play, and this totals to $700 for the entire week.