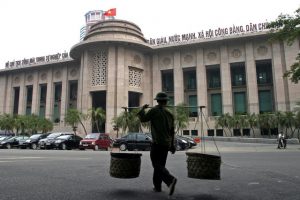 Bitcoin, like most other cryptocurrencies, is something that is weighing heavily on the minds of regulator and economists of developed countries. As a means of payment and general monetary value that is not based on national fiat currencies, the concept has been able to radically change the way transactions, but also things like BTC investment, function around the globe.

However, for the most part, bitcoin concept is something that is mainly connected with the countries of the so-called “first world” or the developed nations across the globe. When it comes to countries that are developing and those that are still undeveloped (aside from the remittance feature of digital currencies), many perceive the same nations as being out of the cryptocurrencies loop.

But, this is not a fixed rule and there are many examples that showcase a different picture. Recently, the nation of Vietnam entered the fray as one of these states with a desire to legalize and recognize BTC in the country. This could have a significant impact on not just the digital currency, but also the same nation and the region of southeast Asia.

The news coming from Vietnam originated with the highest office in the country – the prime minister. According to a statement, the country has a now-approved plan to formally recognize bitcoin as a form of valid payment. The plan stipulates that this recognition will take place by 2018, which sets it in a time window of about 18 months, depending on the interpretation of the end date.

Prime Minister Nguyen Xuan Phuc of Vietnam provided the country’s central bank with the task of creating the legal framework for this to take place. Vietnam’s Ministry of Public Safety and Ministry of Finance are to join in the same process.

For now, it was revealed that the first step of the process will be an inter-governmental assessment on how the same process should be approached. It has to be completed before August 2018, after which the framework for the legalization will be made.

As the document regarding legalizations is prepared, Vietnam’s officials will have an additional task – figuring out acryptocurrency taxation. Taking place in tandem with the legalization, the taxation issue is set to be resolved by June 2019.

This means that by 2020, Vietnam plans to have both a legal system for cryptocurrency use (at least BTC) and a way to tax the same ecosystem. While ambitious, the plan is by no means impossible for the big Asian nation.

At the same time, it signals a big shift in the Vietnam’s approach to cryptocurrencies. In 2014, its government stated that consumers need to be conscious of the risks involved in digital currencies. But, at the same time, its central bank has clearly been working on some kind of an adoption plan. For now, it looks like the same plan is fully in motion.

Out of all the nations of the world that fought for their independence from the colonial power, not many have had such a terrible recent history as Vietnam. Previously known as Indochina, it fought a bitter war in the 1950’s to gain independence from France. But this was nowhere on the scale of what was to come in the form of the civil war that split the country in half, pitting north against the south.

In the conflict that acted as a proxy for a Cold War animosities, the nation of Vietnam ended up completely devastated with millions dead, but also lead to a clear victory by the communist North, which united the country and became one of the most important regional players, although always from a less than prominent role.

In the decades after the Vietnam War, the country fought to liberate Cambodia from the Khmer Rouge and against its juggernaut of a neighbor China, all along resulting in destruction and death for the struggling nation. It could be argued that only after the end of the 1980’s and the collapse of the Warsaw pact did a semblance of peace descend upon Vietnam.

Yet, as history sometimes showed, difficulty and adversity can bring about a spectacular capacity for rebuilding and change. In the case of Vietnam, similar forces were at play during the previous decades and now, it looks like another nation is gunning to join the Asian Tiger club.

After the complex geopolitical isolation and a lot of conflicts, both large and small, the page began to turn for Vietnam with the start of the 21st century. At that point, the nation created diplomatic relations with every other country in the world and began a program of economic development.

Since then, Vietnam has one of the fastest growing economies in the world. This was partly due to the overall state of industrial and economic hardship, where building up was easier because of the catastrophic growth that Vietnam previously had.

The cycle of improvements and development continues, especially thanks to the geography of the country – it is basically surrounded by strong industrial production centers, mainly China, but also other nations in the Far East. Building towards the same goal looks like a logical option for any development that Vietnam might be looking for.

However, the fact that Vietnam is about to make bitcoin a legal equivalent of any other fiat currency, shows a different path of thought. In this future Vietnam, the possibility of generating jobs and revenues related to digital currencies seems like a smart idea. Today, millions utilize bitcoin to gamble online, attain loans, sell and buy things online and do much more.

Getting to a position where Vietnam could utilize its intellectual potential instead of purely manual one is a fantastic option for a regional nation, not just Hanoi. The same would better prepare Vietnam for the future where manufacture is going to be disrupted, just like most traditional industries.

Having bitcoin as a legal currency seems more than reasonable, especially because many nations in the wider region will still use digital currencies only through humanitarian programs. If Vietnam gets to the BTC legalization in the planned timeframe, it is almost certain that this would help it greatly to attain their high level of growth in the next decade.