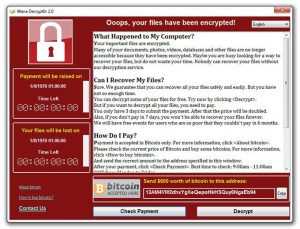 The steady streak of great publicity for bitcoin, generated mainly by spectacularly rising price, was cut short recently after the Ransomware Wanna Cry hit more than 200,000 computers across the globe. In the biggest single digital attack that occurred so far, the same virus hijacked computers and threaten to delete files if a ransom was not paid.

The connection to bitcoin comes with the method in which the payments should have been completed – using BTC. By asking for around $300 or more in bitcoin, the people who made the virus wanted to extort funds from those who have crucial data on their computers. Naturally, the virus or its creators have nothing to do with the bitcoin community, but the incident still lead to the issue of BTC traits, which include among many others, privacy and identity protection for their users.

Because of this, the entire domain of blockchain, which is being developed more than ever both in business purposes but also governmental and civic roles, is also becoming a target of negative press. To make sure there is no toxic fallout for the blockchain domain, different advocates for the same tech have started stepping out into the public discourse with the purpose of distancing it from the negative phenomena that are only using digital currencies for their purposes.

Like with Stuxnet and other important moments in the history of cyber threats and online security, the genesis of this particular malware is complex and includes several different factions. As of now, it appears that the perpetrators of the attack utilized a set of NSA vulnerabilities (or even just one) in the older Windows OS versions.

This vulnerability, however, was then revealed by a series of Wikileaks that shook the intelligence community but was left pretty much as an open source resource that was soon discovered and analyzed by the currently unknown group. With additional effort the same groups or groups managed to weaponize the same security access and created a malware virus that would propagate and spread itself across the internet, opening new vectors of infection.

The results have been disastrous because aside from private computers, the virus also infected many public service sectors across the world. This is why institutions ranging from UK hospitals to German train services felt the impact of the same Ransomware.

Immediately, the global media also latched on to this phenomenon and provided it unpatrolled coverage. Naturally, because of this, the focus also shifted to the payment method that the virus creators set about. Adding a somewhat bizarre and ironical touch, the virus main screen which carries the threat of the file destruction also includes a link with an explanation on how people can create digital wallets and purchase bitcoin.

Because of this, many people reverted to their previously held belief that the bitcoin is nothing more than a vehicle for shady dealings. Now, the blockchain community advocates are trying to step in and make a distinction between the tech and their most popular use, which is today employed in things ranging from BTC poker to huge venture capital investments.

In Washington, a range of different advocacy groups and individuals went on a PR offensive, trying to make sure that the differences between bitcoin and the tech that drives it are clearly known. One of them was an advocacy group that was presenting uses of blockchain technology to congressional staff related to their application in the healthcare system. In their presentation, they acknowledged that the attack did open old wounds that connect the technology to the bitcoin use in illegal or potentially illegal activities.

Additionally, others tried to place bitcoin in a category that is only one of the applications of the broader tech. Here, Srinivas Attili, who is the partner and VP at IBM Global Business Services, said that the blockchain gets a bad reputation because of BTC, but that it does not represent the entire field of this emergent tech.

Others have pointed out that the means of payment for a certain illegal activity does not represent the currency that is being used. In the same manner, the US dollar could be accused of fueling the drug trade, being that is one of the dominant means of global payment in this trade.

Others echoed a similar line in the sense that there is a distancing process aimed to make sure that the terms bitcoin and blockchain are not placed in the same category when it comes to the public. While understandable, this process is ultimately very harmful to the entire field and can compromise a lot more when it comes to the future development of cryptocurrencies and blockchain-based solution than any problematic public perception.

In the case of this particular Ransomware, the US government responded by asking the Homeland Security to look into the sources of the same payments. So far, a vague connection to North Korea was discovered, but there are no other concrete pointers to the culprits. At the same time, when it comes to the issue of bitcoin and blockchain, finding the culprits would not change the global damage made by the incident.

That is the reason why Congressional staffers, speaking privately, pointed out that a clear disassociation needs to be made between bitcoin and the blockchain interest represented by the advocacy groups. Without this, according to these low-ranking officials, any traction in the legislative arena will be hard fought.

Of course, the problem of the entire process is the fact that many of the vulnerabilities presented with Wanna Cry in the healthcare domain could be avoided with a blockchain system. With its decentralized nature, problems with individual computers would be irrelevant.

A Problem of Perception

Like so many times in the past, the issue of bitcoin perception is once again tainted by the activities of those outside of the same ecosystem. This time, an additional problem is presented with the effort of some parts of the blockchain community at isolating themselves from BTC, instead of simply embracing it as one of the valid forms of this tech.

With this internal splintering, there is nothing to be gained and much to be lost for any future development and cooperation. This could be a huge problem and not in a distant future, especially in countries like the US.

Hopefully, the positions in the blockchain community need to accept that bitcoin is one of the most prominent representatives of the tech, for better or worse. Even if they refuse to do this, the public will still continue to perceive things this way for years to come.