One of the big world issues right now is the upcoming EU referendum on whether the UK should remain or leave the European Union. Popularly known as “Brexit,” this is a momentous decision and has every Briton up in arms. There are a lot of issues involved around it and the consequences of Britain leaving the European Union can be quite catastrophic in terms of the economy.

A lot of experts are actually pointing out that the recent surge in Bitcoin prices can be laid at the feet of investors who want their capital protected from the economic turbulence that it would cause. Considering its importance, a lot of people are actually placing wagers on the result.

To understand more about Brexit, people will need to understand a bit of the background behind it. The European Union started out as the European Economic Community for European countries with the Treaty of Rome in 1957. 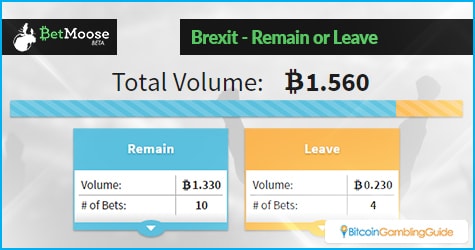 Membership in the EEC allowed members to have free trade and other benefits in exchange for dues. Britain was not part of the original treaty but managed to join in 1973. The EEC developed into the European Union in 1993, creating a supranational body with a common currency that managed the economy of Europe as well as some other benefits like law enforcement info-sharing and easy migration.

The problem is that there are several factions in the Britain that wish to back out of the EU. The first time this was attempted was in 1975 and the British voters came out with 67-percent in favor to remain in the EEC.

Meanwhile, the recent push for leaving the EU started as far back as 2013, with Prime Minister David Cameron promising negotiations with the EU for circumstances of continued membership and a later referendum on whether the UK should leave or stay. The referendum will not immediately end the UK’s association, but it will start the process.

The supporters of Brexit point out that leaving the EU will allow Britain to have better immigration controls, which will reduce the pressure on public services, housing and jobs, while also saving billions in EU membership fees, and allow the country to make its own trade deals.

It would also remove the EU regulations that need to be met for the UK to be part of the European economy. Supporters of remaining in the EU point out the benefits like being part of the larger European economy and better relationships with neighboring countries.

Placing bets on the referendum result

No matter what side a person supports, it is hard to deny that Brexit is causing uproar in betting circles. In fact, William Hill and Betfair—two giants in the world of UK betting—have received some astonishing sums making wagers on the results of the vote. 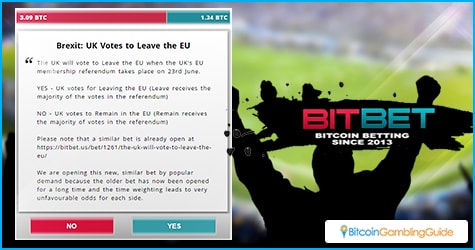 A woman from Central London is betting £100,000 that the UK will stay, while another woman from Kingston wagers £40,000 on the UK to leave. These are not the only ones as Betfair estimates around £40.5 million has been wagered so far on the results. It has already beaten the Scottish referendum when it comes to betting numbers.

For those outside of the UK, people can join in the fun by using Bitcoin to wager on several online betting sites, including prediction markets. Different sites operate differently, so they offer different payouts and wagers. Betmoose has a wager on whether the UK will leave or stay, with a majority betting on the UK to stay. Predictious is selling shares on the UK leaving, with prices at 2 mBTC and a payout of 10 mBTC per share.

With all of these wagers, the upcoming vote on June 23 will be one to watch.