Everyone was betting on the Cavs to win. The odds that the sportsbook placed on them were 7-1 and they managed to reward that faith by delivering a stunning 115-101 win over the Golden State Warriors. The Cavs were the favorite, but the odds would have given those who bet on them a decent payout. With this victory, the Cavaliers have managed to catch up to the Warrior at 3-3 for the Finals series. This means the final game this Sunday will be for all the marbles.

The main fact to take away from Game 6 is as simple as that LeBron James is one of the best players out there. Once again scoring 41 points, the Cavs’ star player also managed to assist in every Cavalier score of the game until the late game. 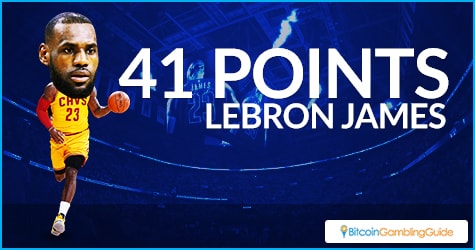 Considering that the Cavs managed to score over 115 points, that is a lot of assisting. Even when he had stopped doing so, LeBron was capable on the defense, stopping the Warriors’ late-game push that managed to close the gap between the scores. With his contributions and performance, it would be true to say that if anyone managed to claw the Cavs back into position for the win, it was LeBron.

The Golden State Warriors are still a good team, though. They showed several moments of aggression during Game 6 and it was the late-game push that managed to get them close to the Cavs’ lead. However, it seems that the team is not firing on all cylinders. Stephen Curry’s performance is not what you would expect from an MVP, while others on the team seem to be not doing their best. Worst of all, Bogut, one of the team’s best defense experts is down from knee injuries. This state is very worrying for many Warriors’ supporters.

The key now will be the game this Sunday. Game 7 means it is a winner-take-all match. If LeBron and his team manage to win this, they would have made history. First, it will be for bringing back the championship to Cleveland. It has been decades since the O’Brien trophy has rested in Cleveland’s arms. Secondly, the Cavs would have managed to come back from a 3-1 ranking in the Finals game. No team has ever done that in the history of the NBA. 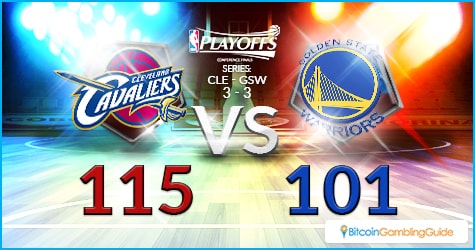 It is going to be an uphill fight, though, for sure. The next game’s odds have already been posted and all of them favor the Golden State Warriors, and the advantage is clearly in their favor: a Warriors win is at 1.50 against the 2.69 of the Cavs on VitalBet.

First, the final game is to be held in Oakland. This means a home-court advantage for the team. This can be the game-changer. Next, the Warriors will be well-rested. LeBron pulled out all the stops these past two games—the question is will he still have gas for the deciding game. People will be watching this Sunday to see if it is so, while sports bettors had better start betting the last NBA finals game in this series.