Habanero will ring in the Chinese New Year with its latest Fire Rooster slot and other Chinese-themed slots. Habanero’s Chinese slots include Fenghuang, 12 Zodiacs, Fa Cai Shen and more.

Players can give these Bitcoin slots a spin at a number of Bitcoin casinos to celebrate Chinese New Year. These casinos include Playamo Casino and BetChan Casino.

Fenghuang is the mythological creature that is lord of all bird creatures. In Today’s Chinese culture, the use of Fenghuang and dragon is a representation of a husband and his wife. Habanero’s Fenghuang slot uses the two mythical creatures as the key figures of the slot game. 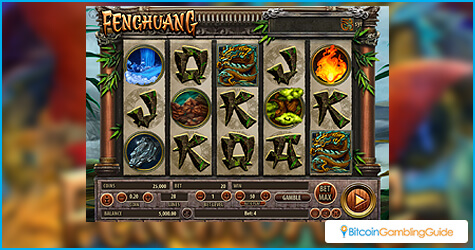 The bonus feature happens when a player makes three or more red lanterns appear on the reels. Any symbols a player match in the bonus mode turns into a red lantern. By turning random matching symbols into one symbol, players have a good chance of matching five lantern symbols that give a big payout.

Fa Cai Shen is a slot about the god of wealth, Caishen. The slot’s name also makes use of the Mandarin Chinese New Year greeting, Gong Xi Fa Cai. ‘Gong Xi’ means wishing someone happiness and ‘Fa Cai’ is to be wealthy.

Caishen is the main focus of Fai Cai Shen’s bonus feature. The god of wealth is the wild symbol of the game where he acts as a substitute for other symbols. During the bonus feature, Caishen’s symbol expands to fill out the whole reel where he lands on. A player can get a large payout if he can get three Caishen symbols to appear.

Playing these Chinese-themed slots from Habanero guarantees fun and prizes for this year’s Chinese New Year celebration. Moreover, the availability of such Bitcoin slots—and the debut of Habanero’s Fire Rooster slot—show the demand in the Asian gambling market.

Online gambling in Asia continues to rise and for developers like Habanero to have a gaming suite with online slots for the Asian market is already an advantage. Although China places stricter rules against iGaming, the region continues to be an ideal place for Bitcoin. The list of available Bitcoin exchanges in China already helps players get started in playing with bitcoins.