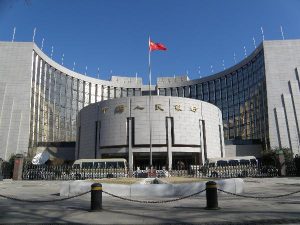 Just nine months from the moment China issued its official warning related to bitcoin exchanges, the Central Bank of China once again impacted the cryptocurrency markets. In fact, it provided a big ripple effect that resulted in markets of all major digital currencies taking a sharp dive.

Instead of digital currency exchanges, this time the focus was on the ICOs or initial coin offerings. On the 4th of September, PBoC (People’s Bank of China) issued a statement that labeled these token sales as illegal. It also said that they impact the economic and financial balance of the country. The same blanket ban of ICOs was then blamed by analysts for the decline in the market cap of the cryptocurrency market.

In fact, on the tailcoats of the same decision, a total of almost $35 billion was taken off of the total capitalization of the markets. The same disruption took only four days even though it did recover somewhat in the period after that. However, while the ban appears to be very drastic, many have stated that it makes perfect sense.

Not only that, the movie should also be perceived as something that will be in place on a temporary basis. Here are some much-needed explanations, along with what potential effects might the ban have on the cryptomarket.

The financial market of China is huge and very difficult to control, even to a level where this lack of control become notorious. In the recent years, the growth of innovation and their reach has allowed bubbles to rise and fall, covering a wide range of different assets. In this category, some are more shadowy than others, but all had the potential to provide unwanted disruption.

This is why this slowly became a big problem for the country. In the same environment, China offered trillions of dollars in different financial products with very little regulation, followed by a get-rich-quick type of mentality.

What was for several previous generations of Chinese a slow and steady rise to better social strata, for the millennial generation, the opportunities seemingly multiplied overnight. The change in the investment changes also led to the individuals setting their sights on very lucrative prizes, which all of a suddenlly could be won in the country.

Cryptomarket epitomize the same idea probably better than any other type of investment asset. The political system in the nation was bound to try to do something about this sooner or later.

When the nature of the political system of China is taken into consideration, the decision to act does not come as a big surprise. The communist party places a lot of its resources and focus on the overall social stability.

This is even more pronounced now that the country is on the road to the 19th national congress where things like the China Belt initiatives will be discussed. This and other grandiose programs offer a chance to change the financial landscape of the entire regions, if not the world itself. The party clearly was not in the mood to let some internal financial instability threaten the image China at the same congress.

Regulators had to step in and ICOs got in the crosshairs. The result disrupted the ICO ventures in the country, but paradoxically, it made a lot bigger impact outside of China.

The market for the ICOs is small when it is compared to the overall size of its economy. However, it has been gaining momentum. The figures provided by the Beijing Internet Finance Association show that in the first seven months of 2017, there were around 65 ICOs. In China itself, they managed to raise almost $400 million for a range of ventures.

The accelerating popularity and reports that the sum raised in July and August managed to reach over $750 million led to many alarm bells starting to ring. This is why many analysts outside of China believe that this total and draconic ban is in fact very reasonable.

In fact, many see it as a way to protect investors at the earliest stages of any investment venture. The US SEC (Securities and Exchange Commission) provided a warning about the ICOs that ended up having a positive effect on the price, but it was still criticized for not pushing the issue far enough. SEC’s declaration that tokens might provide a risk did not impact many of the would-be issuers.

At the same time, many pointed towards the Isle of Man and Quebec way of lightly regulating ICOs as a more effective and constructive approach. However, the direct comparison makes little sense in these examples. Both of the previously mentioned locations are relatively small and this way can afford to be more pro-innovation and are a lot less afraid of risks.

Additionally, aside from the size problem, Chinese ICO market might have a much bigger problem. According to some reports by the central bank, there is a chance that over 90% of the issued tokens so far in 2017 might be fraudulent. Even if the figure is much lower, the same is a burning problem.

China is most definitely not a place that is averse to innovation. A huge number of BTC users, for example, employ this digital currency to gamble online, purchase goods and services, attain loans and do so much more. This makes its digital payment sector one of the technologically most advanced in the world.

Additionally, the nation’s central bank has been involved in blockchain development, including the project of researching its own potential for a PBoC digital currency. It was also willing to send its delegation to the US with the mission of trying to learn more about FinTech application. Because of this, it is clear that China is not stepping back from digital currencies, simply hitting the pause button.

Aside from allowing the markets to settle down, the move will also provide regulators with a chance to define some customer protection mechanism that works well over the long run. Also, there is no doubt that these will be supportive of the overall market growth.

Additionally, Chinese regulators have in the past stepped in and slowed some process down a bit, only to step out once the seas have become calmer. It looks like history is repeating itself in the case of ICO ban.