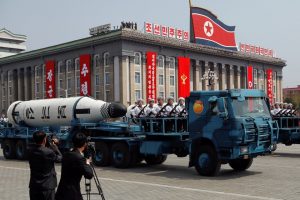 The world of the Far East received an unpleasant shock today as the North Korean Army’s missile division fired several ballistic missiles that flew right above the Japanese home island of Hokkaido. The same misses landed safely in the seas east of Japan, but the impact of the same event has been reverberating the geopolitical spheres ever since.

Naturally, the same has taken effect in the domain of the digital currency and this resulted, somewhat expectedly, with a boost to big players and a rise in the overall market cap. It is always a tricky task to make any definite equations but so far, the events seem to be at least partially related, especially because of the fact that both bitcoin and ether, the two biggest cryptocurrencies, seem to be affected.

Now, the major powers and the regional elements of the same crisis are eyeing the leadership in Pyongyang to try to figure out what is the potential next move either by them or the North Korea. Here is the analysis of how the same event could further translate into the movements on the digital currency stage.

The Rising Tensions of 2017

Ever since the administration of Donald Trump took office, it seems that the Korean peninsula has reverted to its most anxious period since the end of the Korean War almost 70 years ago. The hawkish approach by the US president, fueled by an unclear position of Kim Jong-un in the country’s internal power struggles both made the relationship incredibly strained.

The same was additionally aided by the internal problems of the South Korea, where the series of allegation and trials started to encompass more and more public officials. As if often occurs in the moments when the old systems begin to dissipate, chaos started to spread.

The first shots in this ongoing war of media exposure were fired when the US president declared that an American battle carrier group was on its way to the Korean peninsula. While this in itself is not a questionable act, being that South Korea and the US are firm allies, the timing came in a moment when a potential for a conflict seem exceedingly high.

However, soon after it was revealed that the group is not on its way to the same location, only to, later on, be reverted to a completely new course. Like many other events during this administration, the same was brushed off in a strange manner, leaving analyses unsure if the apparent bluff was intentional or accidental.

At the same time, the regime of Kim Jong-un has continued with the testing of ballistic missiles, with more and more nuclear armaments expert believing that the country will soon be able to attach a thermonuclear warhead on one of these. For the US, the same came as a shocking revelation that could, in theory at least, place states like Hawaii, Alaska and even the western continental US in the range of the same weapons.

Thanks to all of these, there is a strong sense that the events are unfolding outside of anyone’s full control. This is not something any market desires to hear, aside from the cryptocurrencies which have once again become a safe bet in an unpredictable setting.

The price of the ETH or the ethereum’s token has risen dramatically in a space of 24 hours, topping its highest price in the previous two months. The ETH first rose to $340 and then attained a price of $365. Since then, it has dropped slightly but the price appears to be strongly at an upward momentum.

This places it at only about $50 below its highest recorded price ever which marked at $411 on Jun 13, 2017. Most agree that the price was boosted by a very energetic trading sessions inside of South Korea, where two exchanges took a combined 20% of all of the trading. OKCoin, based in China, is in the second place with slightly below 10% of the trading. This means that the two nation took over one-third of all the trading in ETH that took place during the spike.

The same pattern has been seen in other cryptocurrencies recently in South Korea, where Ripple’s XRP, BCC, and monero have all seen gains in prices. Of course, there is one more digital currency that tops all others in terms of relevance and this is bitcoin, used for anything, ranging from purchases to online gambling and direct investment. It too has been setting new records thanks to the Korean activity.

The price of BTC is currently at its highest levels of all time. Today, the price of $4,703 was achieved for a single token, breaking the record from two weeks ago. This means that the price bump of the digital currency has rissen for over 350% since the start of the year, when it was trading for $1k per BTC.

The value of the same digital currency is astonishing and demonstrates the power of the blockchain network that supports it. However, the same is also very much related to the problem facing the Korean peninsula, where the prospect of war must be driving local investors to seek shelter outside of the fiat currencies. The problem is that the rise in all of these prices could come undone in a record time.

In the short term, the prices of the digital currencies in question, but also many others, will be boosted by the rising market cap. But, all of this can be negated completely the moment when the hostilities begin.

The same only show that there is so much at stake in a potential US-North Korea conflict that the same option should not even exist. South Korea represents 2% of the entire world’s economy – any issue it might experience is strongly related to everyone else. A war with a nuclear power is something on a scale outside of anything seen so far.

This is why any new instability in the Korean peninsula would benefit the digital currency domain in the short run. In the long run, the crisis has the potential to do a lot bigger damage than just disrupting cryptocurrency price.