Endorphina will showcase in ICE 2017 the world’s first slot game about vaping. The game is a partnership project with Diamond Vapor, a renowned vaping company that sells curious vape products.

The color scheme of Diamond Vapor slot uses a combination of blue, pink, and violet. This is often the color for seduction and pleasure, which fit the theme of the game. Vaping is indeed a pleasurable activity to do that only people of legal age can partake of.

A clever graphical feature of Endorphina’s Diamond Vapor slot is the fruit symbols. The fruits are e-juice containers that look to have the same flavor as the fruits the containers are representing. This is a great nod to the diverse flavors of e-juices. 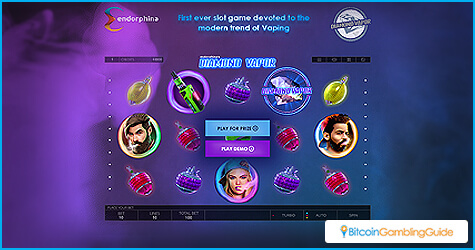 Diamond Vapor has a straightforward expanding reel bonus feature. The bonus occurs when the players match three scatter symbols, which by doing so unlocks free spins. Any symbol that matches during the free spins will turn all of the symbols in its reel into the matching symbol. This simple concept can lead to a massive payout.

Get real prizes from playing the slot

Endorphina is giving away a number of prizes to lucky winners who can visit its stand at the ICE Totally Gaming exhibition hall. Anyone interested in winning real prizes must register at the Vape Slot website. This will give players 10,000 credits to bet with on Endorphina’s special site. Registered players can also get more credits by sharing the game via Facebook.

Endorphina is not a stranger to creating Bitcoin slots that have a famous pop culture theme. One example is Endorphina’s Twerk slot game, which is about the popular modern dance move. Another is the Slotomon Go slot, which was among the list of games released after Satoshi’s Secret slot. 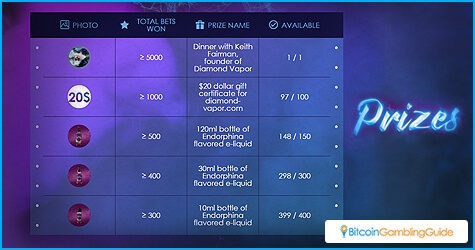 There is no better place to play Endorphina’s games than a Bitcoin casino like Oshi.io. Bitcoin is a superior alternative to the usual fiat money that regular online casinos use. A player can receive his winnings in less than an hour if he uses Bitcoin instead of traditional money. More Bitcoin casinos like Playamo even have the latest Maori and Voodoo slots from Endorphina.