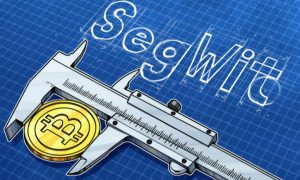 The drive of the bitcoin price continues with unrelenting zest, with the digital currency reaching what was until recently a seemingly impossible level of $1700. On the same day, the trading pushed the price close to $1700, meaning that the next benchmark of $1800 could be around the corner.

With that barrier taken down, no one doubts that the $1900 would be just a short stop towards the 2k mark. All of this could easily take place in the next three months or even faster, which provides individuals in the blockchain space both cause for celebration and unparalleled worry.

As the price skyrockets, many who are actively involved in bitcoin investment believe that a bubble is growing and doing that at a rampant pace. Now, being that many traditional stockbrokers and financial experts also became a part of the ecosystem, a huge amount of energy is being dispensed on trying to figure out resistance points for the price of BTC.

However, at the same time, the scaling solution for the cryptocurrency is still a hotly contested issue and one that is more than relevant. For most of the newcomers to the cryptocurrency this term might mean little or even absolutely nothing, but its future could either unlock an enormous potential or create a range of problems bigger than any price bubble bursting.

As the P2P network that represents the bitcoin currency continues to grow, the issue of scaling becomes more and more pressing. At the beginning of the network, all transactions for things like bitcoin gambling or any other endeavor took place practically instantly as the network nodes checked and confirmed the same process.

But now, the mining pools and other providers of the hashing power are less able to keep up with the demands and the network is starting to experience more and more lag. The resolution can come from so-called lightning networks, which are additions to the main bitcoin system or through the elevation of the size of a single block.

This is known as a scaling solution, but the problem is that more than one potential vendor are proposing competing alternatives. These come in the form of alternative offered by Bitcoin Core and Bitcoin Unlimited. Being that the bitcoin community has not really placed its weight behind either one of these, the solution is still being sought after.

This is why many believe that the recent record-breaking level is only a fraction of what is possible if the debate is ultimately solved. If this occurs, the price jump could be both substantial and also less likely to collapse on its own at some point in the near future.

Global Advisors Bitcoin Investment Fund or GABI for short is a hedge fund that is focused on blockchain technology. Recently, they send out a message to their investors related to the recent shifts in the digital currency market, covering not only bitcoin and ether, but also litecoin.

Here, the company touched upon the fact that SegWit was integrated with this alt-currency. At the same time, the same solution is inside of the bitcoin domain but many miners are not accepting it on political (affiliation) or technical grounds.

But, GABI argues that if the same solution is placed inside of the bitcoin network, the same effect as those in litecoin will be seen – an overall rally and an additional price boost. This would be triggered mainly be the higher functionality of the network and the fact that the miners were able to reach a consensus. Both of these are very reassuring for any type of investor.

GABI showcased their point by showing that there were no pressures on litecoin to go for a scaling solution, but the upgrade still went ahead. Now, if this situation can be perceived even as lightly indicative or predictive of the same scenario taking place in bitcoin, it would at the very least show a progress towards a resolution, if not a complete solution in itself.

With this in mind, GABI analysts believe that the results would be dramatically in a good way. In this scenario, according to the company, a doubling of the price would not come as a big surprise.

The hedge fund also noted that the spike in interested in the cryptocurrency markets did not include only bitcoin, but other alternatives as well. Now, GABI believes that these are increasingly finding their footing away from the shadow of bitcoin. That is why for the first time in history, the market cap of all the cryptocurrency went over $50 billion.

As of now, BTC holds over 50% with about $27 billion invested in the network. But, with ether not covering anything near that percentage, networks like litecoin, zcash and many others profited from the jump enormously.

For most traders, this equates into a maturity of the broader market, which makes it impervious to big and sudden issues, like the one that plagued bitcoin with the collapse of Mt. Gox. With a level of ongoing diversification, the same would be almost impossible. But, when the notion of further branching out of the investors is taken into consideration, it can be said that the wider field of digital currencies found enough investment to really put itself permanently on the map.

Going Over the Hurdle

Scaling is a necessary step for the bitcoin network in any perceivable way. The hesitation currently in place around SegWit and the tribal politics being waged will not benefit anyone, even though the recent setup appears to show otherwise.

But, the price spike, no matter how profitable, does not resolve the underlying issues or make them any less problematic. A consensus has to be reached and the opponents of SegWit have a dividing window of providing an equally functional alternative.

If this does not occur, it would be foolish to risk the entire network position because of unresolved animosities. Other digital currencies are primed and ready to try to take its market position. Because of this, bitcoin has a lot to gain but also plenty to lose, all riding on the eventual resolution of the scaling issue.