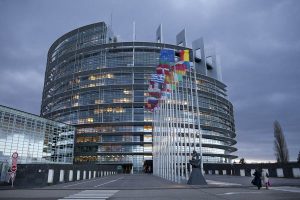 The economic impact of the existence of the EU, the biggest political and financial alliance in the world, is abundantly clear. In the modern world, the European Union is one of the most important factors of the global growth and development. At the same time, the nature of its members, which belong to the developed nation of the Old continent, provides the perfect background for the same union to be a hub of technological advancement.

In reality, the truth is the EU is somewhat lagging behind places like North America and the Far East. Today, it is not seen as a region where the applied tech is being pushed to its limits and further evolved. There are many places in the EU which produce exceedingly high-tech solutions, but these are focused on niche industries or they take place in the broader educational or academic context.

Unlike its developed partners in the Western world, the EU has a lot of catching up to do to attain the level of tech advancement in the previously mentioned regions. Blockchain tech belongs in the same category, being that is sorely misrepresented in the EU FinTech circles. However, there is some news that suggests a change in the ways this problem is being addressed by Brussels.

The EU’s executive branch has recently unveiled it is creating a blockchain-based system that is designed to help users access and share information on the domain of the listed companies operating in the block. The news shows that this is still a pilot project but one which points that the EU is generally interested in developing blockchain projects aimed at its citizens.

Additionally, there is a connection between this project and the EU’s so-called blockchain observatory. This is a growing setup by the EU in which thousands of euros are being spent weekly with the purpose of creating a system which could be used to observe and assess the value of individual blockchain projects and their potential significance for the EU citizens and institutions.

The previously mentioned project aims at providing more transparency in the business area, while others could function differently. But, all of them should be related to the EU’s public sector and the way it provides its services and information to the block’s citizens.

Being that this sounds like a great idea for any part of the world looking for growth and development, it should come naturally to the EU. However, history of the block’s dealings with the digital currencies in general points towards a different standpoint.

The EU has been an entity that has never provided any support for the existing, non-national digital currencies. Instead, it offered a wall of consumer protection systems that are used to make sure their citizens do not get wronged in some manner by the same digital currencies.

Because of this, there is a sense that the EU holds no sympathies for the bitcoin development community or any other one for that matter. Instead, the EU seems preoccupied with safeguards that have been mostly deemed too restrictive by the developers, especially the recent initiative of making a database of all cryptocurrency users on its territory.

There are millions of digital currency holders in the EU, many of whom use BTC to access online casinos, invest bitcoin, purchase things online or do anything else in the range of potential uses, the restrictive measures would impact all of them. At the same time, it is directed right at the core of what digital currencies offer to their users – a level of identity protection and anonymity, which is what seems to be incompatible with the EU legal system.

All of this shows that the EU is not willing to try to find a legal framework for digital currencies. The issue has nothing to do with its capacity to technically support these changes, being that the funds pushed into the blockchain initiative show how much practical and financial support there is for blockchain applications which the EU deems relevant.

Instead, there is a lack of political will to try to locate a pathway for digital currency acceptance into the block’s population. This approach might be brimming with safety concerns, but is hindering the block’s future development, especially by marking some of its features (anonymity) incompatible with its laws.

Recently, Japan showed that even the most developed nations can find a method of keeping their consumer protection laws and still legally work with digital currencies (in this case, bitcoin). The EU could try going the same route, but for now, there is not enough pressure or potential for the legislators to do this, which is why digital currencies remain a bridge too far.

As of right now, applying blockchain into the government project looks like it is going to remain the desired approach by the EU. These clearly have a lot to offer to any country, not just the EU, but the disjointed nature of the same process should be worrying for anyone who wants to see the block improve its chances for future economic growth.

The US is a good example of the way how business could be conducted when it comes to digital currencies and blockchain. Instead of having a single unified approach to regulating both digital currencies and development of these blockchain initiatives, the US is taking a murky approach. Clearly, on the state level, there is a lot of autonomy related to its issue, while the central federal government is investing heavily into blockchain research.

This way, the doors for the existing digital currencies do not get fully closed or opened; this does not, however, hamper the way other applications are being developed. Naturally, the US is not the EU on many levels, but the same undefined approach could serve the European leaders very well – instead of shunning digital currencies before anything can be fully determined about them, they should be given a chance. As their individual setup and functionality become clearer, the regulatory commissions should react, but with a chance of doing what Japan did and recognizing one or more digital currency as viable financial means in the block.