This year’s UEFA European Championship has begun another stage as the quarterfinals begin. The four matches for this part of the tournament will determine which teams will enter the semis. This is another single elimination round, which means if a team is beaten, they are out of the running. After the round of 16, eight teams are up for the quarterfinals, with favorites like Germany and France earning a prominent place on the roster.

In the first match of the quarterfinals, the powerhouse team of Portugal went up against newcomers Poland. This was actually a test of a match. Portugal has managed to coast by on all of its previous matches, constantly drawing and winning in the penalties. Poland, on the other hand, started strong but seemed to run out of gas a few games ago. The team had begun the tournament with an aggressive stance and had slowed down to a more defensive approach. 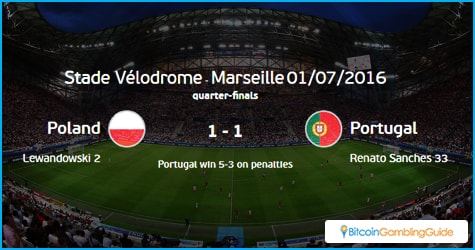 Pre-game, a lot of people were betting on Portugal as the favorite. Even if they had shown lackluster performance, they still had the superstar Ronaldo with them. As it was, it seemed that the Portuguese was on the ropes for a majority of the game. The team managed to tie with Poland and keep it there until the end of the game. This meant the match was to be decided via penalties.

In this, Renato Sanches, the new 18-year old star, managed to clinch the game by scoring the winning penalty goal. This win ensures that they will move on to the semifinals. With the current matchups, they will either face Wales or Belgium, and it will be another test to see if they can depend on luck to always pull through for them.

There are three remaining matches for the Euro 2016 quarterfinals. The next one will be the Wales versus Belgium match for July 2. Online sportsbooks like Nitrogen Sports and VitalBet have already posted odds for this one and the overwhelming favorite is the Belgian team.

The team has two high-profile players that have people being confident in their victory: Eden Hazard and Marc Wilmots. The team has also performed very well, with devastating wins over Ireland and Hungary. Wales is looking good, too. They have Gareth Bale to power their strategies, though there is some worry about Ashley Williams’ injury. 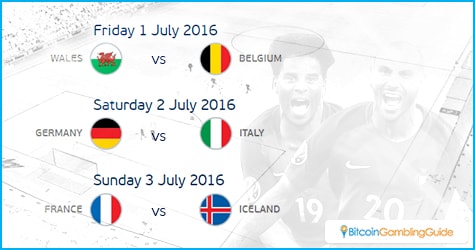 After that, there are the matches of Germany and France. Germany faces off against Italy and it will be a tough one. Germany is one of the tournament’s best teams right now, but Italy has managed to show that its own team has teeth with devastating wins over Belgium and Spain. The odds for both teams are close, meaning that the match can go either way. As for France, the team faces off against this year’s Cinderella story, Iceland. The little team that could have a long shot, but it does not pay to underestimate them. It will be an interesting match to watch, nonetheless.

Three more games before the semifinal matches are yet to be decided. As the Euro 2016 climbs towards its climax, the excitement will rise to a fevered pitch.