The European Championship is just days away, and the first match between France and Romania on Friday officially marks the quadrennial international men’s football championship. With the finals set for a July 10 match, football enthusiasts across Europe—or even beyond—are treated to a month-long tournament filled with excitement, pride, and hope.

Just as excited as the fans are, sports bettors can no longer contain the urge to place as many bets on the pre-match events already on board the Bitcoin sportsbooks. Wagering on the teams favored to win will surely be a wise move, but if there is one thing to learn from sports and sports betting: never count the underdogs out.

The Euro 2016 matches are open to both pre-match and live betting on Bitcoin sports betting sites like VitalBet and DirectBet, but some online sportsbooks are pushing the football spirit even more with the addition of more promotions set to add thrills and cashouts for the entire month.

As if the regular pre-match and in-play bets are not enough, Cloudbet recently unveiled its latest promotion in line with the European Championship. Called Euro 2016 Bet Challenge, this competition gives users the chance to win as much as 300 BTC when they correctly predict the winner for every bracket. This means a perfect bracket of all the winners for the entire tournament instantly makes the lucky player $160,000 richer. 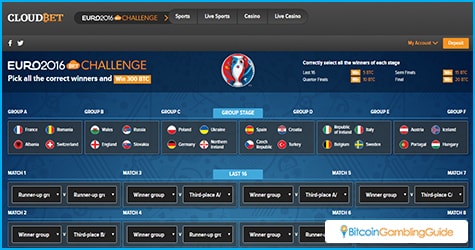 Even if the prediction for every single match is spot-on, this free-for-all bracket competition, however, is designed to reward those who still make the right guesses every round. Name all the 16 teams to advance to the Round of 16 to win 5 BTC, while a double of that prize awaits players who are lucky enough to select the eight teams to enter the quarterfinals.

Meanwhile, 15 BTC and 20 BTC will be won by bettors who correctly predict the four teams to be in the semifinals, as well as the two teams who will have a chance at becoming the champion for the 15th edition of the European Championship.

“At Cloudbet, we strive to provide our loyal users with the best online bitcoin betting experience by offering unique and exciting rewards and competitions. The Euro 2016 bracket competition is open to all Cloudbet users, and even if you don’t have a Cloudbet account, you can easily create one in order to take part in this exciting promotion.”

Paired with the standard bets on Cloudbet, the Euro 2016 Bet Challenge is a perfect tool to make the Euro 2016 betting experience more engaging and attractive.

It is a completely different take on the Euro 2016 for the newly launched SportsBet.io. On this sportsbook, players can make their betting spree much sweeter with the daily raffle and the tickets to the semi-finals at Stade Velodrome or Stade de Lyon on July 6 or 7. 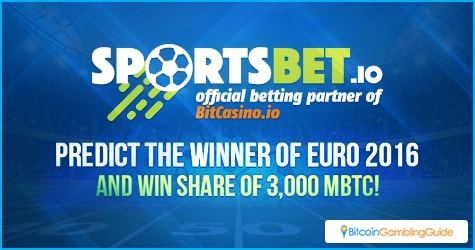 SportsBet.io went live in time for the European Championship and it evidently made a grand entrance with these two promotions specifically crafted for Euro 2016. The daily raffle entitles players to win a share of the 3 BTC or 5 BTC prize pool, provided that they place a minimum bet on any of the Euro 2016 matches.

Meanwhile, the other promo gives the 20 best bettors amazing prizes while the top four will find themselves on the plane to France to watch the semi-finals match. These two Euro 2016 promos by SportBet.io, on top of the standard betting feature available on the site are reason enough to experience the football action and begin placing bets.