Dota 2 has been a phenomenon in the eSports circuit for the past few years. One of the big reasons for that is the support that is being offered Valve in the form of The International.

First held in 2011 in Germany, the first The International Dota 2 Championships had a total prize pot of $1.6 million with the grand prize at $1 million. Since then, the International has been an eSports stalwart, with the competition being one of the field’s most solid events.

This year’s International is about to start and the world of eSports, especially the fans of Dota 2, cannot help getting excited. The tournament will have the biggest prize pool in eSports history at over $19 million. With some of the best teams in the world competing, it will be interesting how the matches will go.

The competition will be divided into two parts. This week, from Aug. 3 to Aug. 5, the Group Stage takes place, which will determine the team’s seeding for the main event. This is important since it can determine the potential matchups next week. 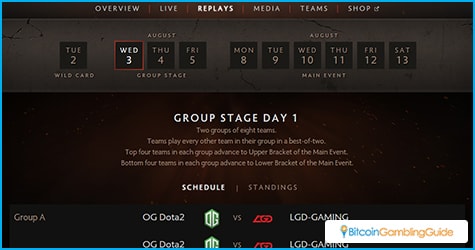 The full 16-team lineup, which is composed of the invited teams, the qualified teams, and the winners of the Wild Card matchups, will be going head to head in two groups of eight.

It will be a round robin match up of best of two matches, where each win grants the team with corresponding points. The more points the teams receive, the better their position will be in the team brackets in the main event.

With eSports’ popularity, there are quite a few sportsbooks that have managed to put the odds on coming matches.  With several teams competing in the day, there are quite few odds up. Prospective bettors should take a look at Nitrogen Sports, BetBaller, and SportsBet.io for some Bitcoin eSports betting action.

Since no teams will be eliminated in this part of the competition, the battles will not be as desperate. However, being part of the upper bracket can make it easier for the team to be the overall winner at the end of the International.

Looking at the odds, they favor those who managed to get invited by Valve like OG and Team Liquid. This mostly stems from the fact that getting an invite to the International means that a team has managed to become skilled enough to merit the attention. 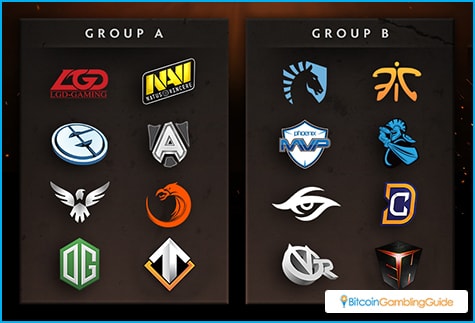 The Group Stage, while a thrilling matchup, is just a warmup. Next week’s main event will be pushing all of these teams to their limit. It will be a best-of-three double elimination event and it will be a brutally cutthroat as teams go for the top prize.

With the entire event broadcast on Twitch, YouTube, and other streaming services, the International will be the biggest eSports event this year. eSports bettors will miss out a lot if they do not join.