The Rio Olympics continues and one of its highlights has just finished. The 100-meter race has had a long and storied history. The shortest distance race in the Olympic list of events, it has been open to men since 1896 and to women since 1928.

The short distance ensures that the race is all about speed, with runners giving their all to ensure that they are at their fastest. This goes beyond the physical. Competitors try to train for all conditions so that they can maintain their speed in rain or shine, while they also psych themselves up so that they are as mentally tough as possible. 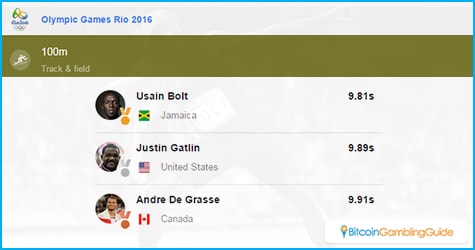 This is well worth it since the winner of the Olympic race often ends up being called “the fastest runner in the world” which is quite a prestigious title. In the past, the US dominated the sport, but the current crown is held by Usain Bolt for the men’s division and Shelly-Ann Fraser for the women’s.

With the popularity of the sport, it gets a lot of attention. One of the types of attention it gets is from the sportsbooks. A lot of betting went on before the starting pistol fired and sports bettors had a grand time placing wagers on who might win the 100m dash.

For the men’s division, everyone agreed that it was basically a match between Usain Bolt and Justin Gatlin. Bolt has electrified the world with his achievements. The runner has won multiple gold medals and broken several world records. All of the sportsbooks had the Jamaican as the favorite.

Close behind him in the odds was Justin Gatlin. Having been punished for doping more than a decade ago, Gatlin has recently made a comeback. His time trials during the qualifications had many thinking he would be able to go toe-to-toe with Bolt. The attractive 2.5 odds on him had quite a few placed a wager on him to win, hoping for a big payday.

Unfortunately, Bolt has proven once again that he is at the top of his game. With a time of 9.81 seconds—0.08 seconds faster than Gatlin—he may not have broken records, but it was enough to win the race. The 1.5 odds on him would have paid off if the bet was large enough, though the thrill of being right is enough for some sports bettors. 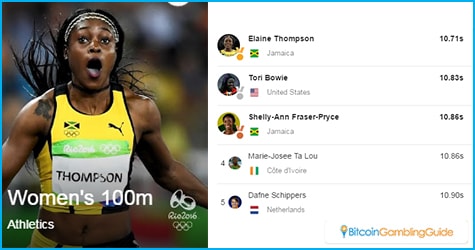 As for the women’s division, Elaine Thompson from Jamaica managed to cross the finish line first. She was among the three favorites in the sportsbooks along with Dafne Schippers from the Netherlands and fellow Jamaican Shelly Ann Fraser-Pryce. Thompson led the way, followed closely by American Tori Bowie. Fraser-Pryce managed to get the third position. However, Schippers surprised everyone with her dismal performance, arriving at fifth.

With the betting on the races over, the Rio 2016 Olympics still has quite a bit to offer. Sports bettors should check out other sporting events they can wager on.