Japan is known for being very strict when it comes to laws. This can be a bit problematic for both online gambling enthusiasts and Bitcoin fans. The Japanese laws concerning them, however, are either archaic or non-existent.

For online gambling, Japanese law, specifically Chapter 23 of their Penal code, clearly states that gambling is prohibited, but there are some exceptions from the ban. Public sports betting organized by the local government and lotteries are the most well-known example, while pachinko is a borderline case. This same approach of having exemptions is true for online gambling. Online casinos and the like are completely illegal, while local sports betting is allowed through authorized sites and is limited to just four sports.

Japanese Bitcoin regulation is a bit more lax. Japan was where Mt. Gox, once the world’s biggest Bitcoin exchange, was located and it had a solid reputation in the country until it all came tumbling down in the 2014 hacking scandal. It was a wake-up call and the government had to quickly set up a few guidelines on how to deal with the cryptocurrency. 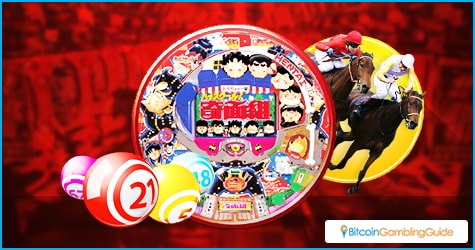 The current state of affairs

At present, both Bitcoin and online gambling are in a bit of a limbo, with the online Bitcoin gambling even more in a legal gray area. This, however, puts the Bitcoin gambling market to a better position since it is not actively being suppressed.

On a similar note, Bitcoin and cryptocurrencies are doing well. The Japanese response to the Mt. Gox scandal was an initial hesitance concerning cryptocurrencies and Bitcoin in particular, but this little bump was easily surmounted. Nowadays, Japan has become one of the leading markets for cryptocurrencies, with over 50,000 BTC being traded daily in the country.

An example of this willingness to adopt cryptocurrencies is the rise of Counterparty. Counterparty is an altcoin in the same vein as Ethereum, and it has become very popular for use in the mobile gaming industry, with some games actually adopting Counterparty tokens as in-game currency.

As for online gambling, savvy Japanese gamblers are freely betting wherever they want online. It is difficult for bans on online gambling to be implemented, especially if the gamers are playing in the privacy of their home. Furthermore, most of the sites that they frequent often operate outside of the country so that the government has no control over them. 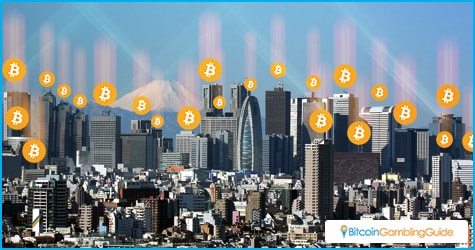 The Japanese government has not been idle, though. It recognizes that both Bitcoin and online gambling can be beneficial for the country as a whole and have put legislation on the way for both. Bitcoin legislation seems to be having an easier time with the Japanese Financial Services Agency suggesting revisions to current currency laws so that they might cover digital currencies. Gambling legislation, on the other hand, is a bit stalled, with the most recent attempt at revising gambling legislation being early last year.

Bitcoin gambling in Japan may look to be a bit rocky, but there is hope on the horizon for complete legalization.