Just-Dice is by far one of the most popular cryptocurrency-based dice sites, run by a community member named Dooglus. This Bitcoin gambling site closed down earlier this year, sparking a lot of conversation about why, as well as whether or not it would ever come back online. While the details remained scarce, Just-Dice has officially come back online, though it came with a somewhat silent return. Rather than going around letting everyone know, it just popped up and other community members started sharing the word.

Rather than supporting the most common digital currency, Bitcoin, Just-Dice has taken the route of using an altcoin, called CLAMs. While the site has supported altcoins in the past (like DOGE being accepted on Doge-Dice), it was unexpected for an altcoin to be the primary method of gambling on the site. Luckily, the community has largely accepted it for what it is and worked towards building JD back up to where it was.

So why were CLAMs chosen? Because they can’t be converted to fiat, and therefore they reduce the legal problems Just-Dice could otherwise face. While some sites have taken to closing down permanently, JD has taken the route of simply avoiding fiat-based coins. 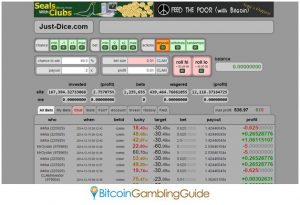 Prior to acceptance on Just-Dice, CLAM had little value. It wasn’t usable anywhere and could only be utilized for trading back and forth for Bitcoin. Because of this, there was really no use to the coins. Now that they are accepted on JD, however, the trading volume has increased considerably, as has the value. And both of these have been showing that they are still on a rise, though it’s hard to tell where that’s going to stop.

Bring On the Volatility

While the CLAM cryptocurrency is showing a pretty healthy outlook, it’s important to understand what it means when it comes to gambling. Just like Bitcoin, if the value goes down you can still incur losses – even if you win on the site. At the same time, it can also go in the opposite direction, with profit being made even when losing coins. As a result of this volatility, it’s important to evaluate the market before getting involved, so as to minimize potential losses. As it is, the price can spike up or drop down all of a sudden, and that should be accounted for.

When it comes to rankings of dice sites based on their investment amounts (noted in BTC and converted for other currencies), JD, a former Bitcoin dice platform, has re-solidified its place among the top. Despite only having been open a little over a week, it is already in second place, claiming its way towards first ever so quickly. This further helps cement the trust users have in the creator and his previous track record (where JD had, at its peak, over $60 million in BTC in its possession – almost all of which was investments from outsiders). So when it comes to finding a trustworthy site to play on and exhibit the winning dice strategy, there you go!