Nate Diaz and Conor McGregor clashed in UFC 196 earlier this year. Everyone was expecting the favorite McGregor to take down the American in the match, but Diaz managed to beat expectations. He took down McGregor with a submission in the second round of the match.

However, with the MMA scene’s hyper-aggressive nature, a rematch was soon scheduled. That is what happened last Saturday as the main event of UFC 202.

Last Saturday’s fight between Diaz and McGregor started out with the latter bursting out of the gate. It had seemed that the Irish mixed-martial artist had not learned his lesson from his initial match with Diaz. The last time around, McGregor had gone for an overaggressive approach and ended up in a trap—a rear submission choke hold taking him down. However, this time, it seems McGregor had a plan. 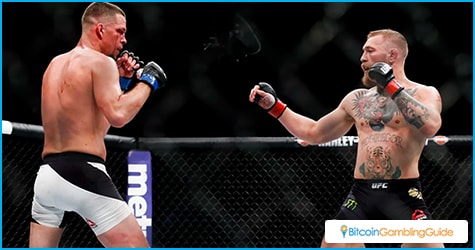 McGregor’s strategy was to focus on battering Diaz’s leading leg. The approach may not be as impressive as going for body blows but in MMA, where the entire body is a weapon, this can lead to a significant advantage.

This was shown when the onslaught led to a punch that knocked Diaz down in the first round. He managed to stand back up, but McGregor continued his punishing assault into the next round. The second round had the Irish fighter drop Diaz to the mat two times, but he still managed to struggle onwards to the third.

The third round is when Diaz managed to make a comeback. The early rounds must have taken a lot out of McGregor as the match suddenly became a more even fight. The Irish fighter took several good hits but only went down in the fifth round, but swiftly got back up.

Diaz tried to use his size advantage to close in with McGregor, but he managed to slip away. At the end of the match, the judges had to decide the winner. They awarded the win to McGregor in a majority decision.

This match was an impressive one, with a stunning battle of wills and skill. Though the odds were close in the sportsbooks, McGregor bettors came out of this as the winner at 1.74 odds. That nearly doubles their wager.

This victory vindicates McGregor as he adds another one to his record, making it 20-3. The rivalry is not over, though, with Diaz raring for a rematch. 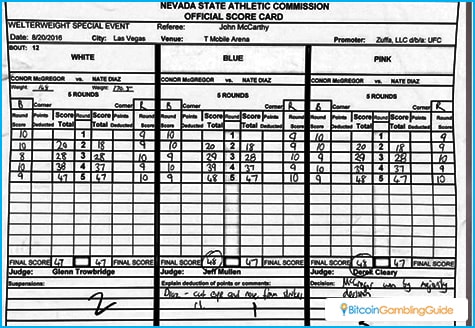 McGregor has a demand too, though. As the Irish fighter stated in his post-match press conference, he wants another go at Diaz, this time at 155 pounds. McGregor had to raise his weight to 170 for this match to go through and says that if Diaz wants a rematch, he’ll have to be the one to meet the weight restrictions.

Another fight between these two will be interesting to see and will be among the highly anticipated events both in the octagon and in Bitcoin sportsbooks.

Meanwhile, last Saturday’s match was the also the first UFC match under new management. The MMA promotion company was sold last month for $4 billion to William Morris Endeavor Entertainment, LLC. This latest match proves that it was well worth the purchase.