One of the more popular themes right now is rock and roll. Rock and roll slot games often focus on the image and the music and this often makes them a treat to play. Two good examples of the genre are Betsoft’s Rock Star slot and NetEnt’s Guns N Roses slot. Here is a quick rundown on the two games:

Rock Star is a game developed by Betsoft, and its rock and roll theme is excellent. Players are immediately greeted by a video of a stadium full of screaming fans waiting for a rock and roll concert to start. When the concert starts, that is when players start to play. The game uses 3D art for all its slot symbols. These include pictures of the band members, fans, a whiskey bottle and more. The rock star theme is even more emphasized by the use of its special sound track and animations. 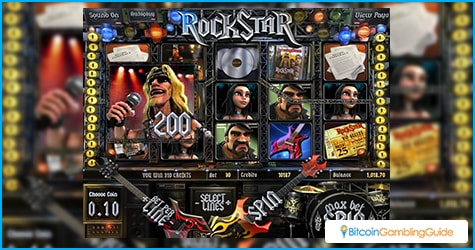 Rock Star’s gameplay is actually pretty interesting. The game has five reels and three rows, while using 30 paylines. Players can modify bet sizes and can potentially win up to a maximum of 2,500 coins. The slot game has quite a few bonuses as well. The record symbols act as multipliers, with the gold ones multiplying by twos and the platinum multiplying by four. Combining these two gets players a x10 multiplier.

Moreover, matching guitar symbols can activate the Epic Solo bonus feature, where players can win three random prizes. Ticket symbols will activate the Are You Ready to Rock? bonus that can potentially give a lot of multipliers.

If players are to notice, the band shares a striking resemblance with Guns N’ Roses, which coincidentally now has its own licensed slots under NetEnt.

NetEnt has also developed its own rock and roll game. The Guns N Roses slot takes the theme and runs with it, with a little help from a license from the Guns N’ Roses band.

Inspired by the band’s 30th birthday, it uses animation, video and music to deliver the entire rock and roll experience. Players can have fun with concert videos and specific hits from the Guns N’ Roses discography. 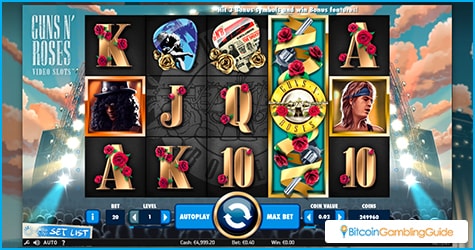 The game has most of the same features as Rock Star, but it has some specific bonus games. For example, the Appetite for Destruction bonus creates a Wild in the shape of a cross. This gives players more chances of winning. The big attraction is the Crowd Pleaser bonus game which allows players to pick their own bonuses, potentially getting a large one. The Guns N Roses slot game can be even more fun than the Rock Star game, and this is largely due to the impressive graphics and player interaction.

Bitcoin gamblers can enjoy these two rock and roll games in several online casinos that offer games from Betsoft and NetEnt. The list includes FortuneJack, BitStarz, and BetChain Casino, among many others. These online casinos present an excellent place to enjoy these bitcoin slot games.