The figures do not lie. Bitcoin transactions in Latin America for the past months more than doubled, and this is a good indication that Bitcoin adoption in the region is positive.

Bitpay, the largest Bitcoin merchant payment processor in the world, registered 3,509 transactions in June as compared to 2,602 in May. To further exhibit the significant spike in the number of transactions across the region, there were only 478 transactions recorded on the Bitcoin network for the month of June.

As the monthly transactions began to gain momentum beginning March, analysts believe Latin America will serve as the market to watch out for—one that will play an instrumental role in the success of Bitcoin, even more so in the effective expansion of the Bitcoin gambling sector. 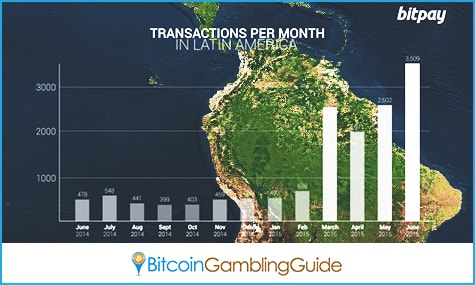 Despite the rather outdated gambling laws or the lack thereof, this region has become an ideal market for the iGaming industry. In fact, heavy marketing campaigns for popular names like Bet365 and PokerStars were initiated last year, showing Latin America’s potential to become the next big thing in online gambling.

Countries like Mexico and Brazil are expected to be at the forefront of this development, and it appears as if the clamor for a thriving online gambling industry in the region is about to take off with the help of cryptocurrencies like Bitcoin.

Bitcoin, being decentralized, anonymous, and cost-efficient, has become a perfect tool in revolutionizing the present state of iGaming. It also fits the economic setting of South American countries, where many of the population remain unbanked.

With the presence of Bitcoin, not only can more individuals engage in betting on various Bitcoin games—be they casino, sports betting, poker, or others—players can also enjoy the benefits of integrating Bitcoin for entertainment and winning rewards. 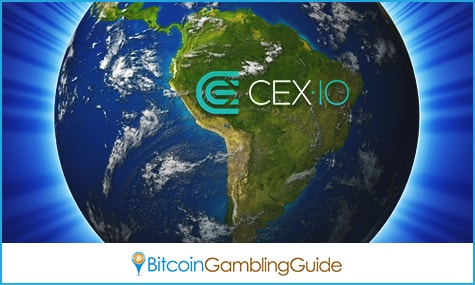 The record-breaking Bitcoin transactions among Latin American bitcoiners are a clear indication of what the future of Bitcoin gambling may be in a few months or years. Unfortunately, users in this region were troubled by the taxing and costlier processes of trading the digital currency.

This, however, is bound to change as CEX.io, one of the renowned Bitcoin exchange services provider, now caters to Latin American customers through the online payment solution AstroPay.

This partnership is an answered prayer to those looking at how to get bitcoins locally since it enables cryptocurrency users to buy bitcoins without the hassle of using wire transfer or card payments. They can also use the local currency and skip the step of converting their funds to US dollars before purchasing Bitcoin—a process that leaves customers at a disadvantage financially.

CEX.io has already reduced its minimum withdrawal limits and commission rates while AstroPay will charge a 2.5-percent transaction fee for every withdrawal and deposit, which is significantly lower than the fees required in wire transfers.

As the Bitcoin ecosystem eyes its growth in this region, Bitcoin gambling in Latin America may set out sooner than expected.