mBit Casino unveiled its special treat for December to celebrate the holiday season. For the entire month, every player has a chance to win big just by playing the exciting Bitcoin slots in the library.

The mBit Casino December promotion will give away a total of 10 BTC in prizes to 30 lucky winners who will top the leaderboard. Everything is all set for this month’s promotion and all the players need to do is to start spinning the reels.

The rules are pretty simple. Starting Dec. 1 until the end of the month, mBit Casino will monitor all Bitcoin slot game players. The amount that a player wagers will be tracked and this will determine their ranking. The top 30 players who wagered the most throughout the month will receive a part of the 10 BTC prize pool. 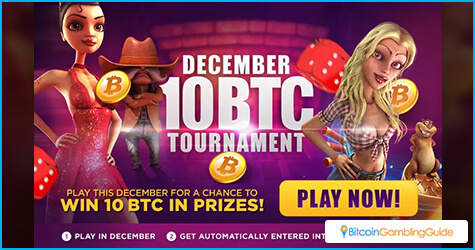 The player who will top the leaderboard gets the largest share of the prize pool. A 1.75 BTC price will go straight to the lucky player’s account as the special gift for playing the Bitcoin slots at mBit Casino. The second and third placers will receive 1.25 BTC and 1.00 BTC each. Players who want to earn the three largest prizes must start playing the slots on board.

mBit Casino feels extra generous this month, so players who complete the remaining spots in the top five will get 0.75 and 0.50 BTC as rewards. The lower half of the top 10 list receives 0.30 BTC each; while the next set of 10 players receive 0.20 BTC. Those players who enter the leaderboard but fall short in breaking into the top 20 will have to settle for 0.125 BTC prize.

mBit Casino has a ton of slot games from top providers like Endorphina, GameART, Habanero, MrSlotty, SoftSwiss, iSoftBet and more. Combined with the bonuses, this will only encourage people to play more.

Big way to celebrate achievements in 2016

mBit Casino is one of the popular casinos out there. With a solid platform, this Bitcoin casino attracts a lot of bettors to play there. The games are plentiful and the site has really made itself a lot better than it was when it started out.

Several changes for mBit Casino happened this year. The biggest one was when mBit Casino announced that it would be shifting from CoinGaming.io platform to SoftSwiss platform. This was a big change. The result was that it completely overhauled how accounts were made and also how they did their money transactions. 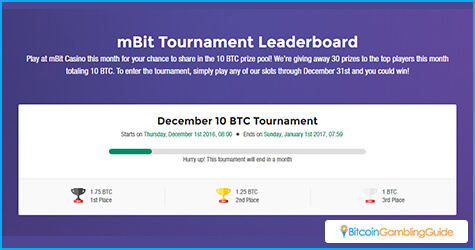 The switch from CoinGaming to SoftSwiss also meant that the Bitcoin casino had a whole new catalog of games to show off to players. This includes more than 400 games, ranging from slots to table games. The people behind mBit Casino were confident that this fit into their plans for growth and expansion.

As another change, mBit also upgraded its VIP program. Running alongside the Bitcoin casino bonus deals on board, the VIP program is composed of four tiers. Starting from silver, players progress to gold, then diamond, and finally black.

Each level of the VIP program gives players all of the benefits of the lower levels of the program while giving a few more perks. Some of the benefits include access to the mBit VIP store, increased deposit bonuses for every reload, and participation in the regular Bitcoin lotteries.