Americas Cardroom made another mark on the Bitcoin poker market after its second successful Million Dollar Sunday event held on April 12.

Earning the title for being the only poker site to offer such high-stake tournaments, Americas Cardroom pushed through with another set of $1 million prize pool just two months after its initial offering in February.

The recently concluded special GTD tournament this month is expected to boost the player traffic of Winning Poker Network as the latest million-dollar tourney recorded a total of 1,267 players and 548 re-entries, proving that the market for US poker players online is very active, including those who prefer to play using their bitcoins.

The Million Dollar Sunday event is a highly anticipated promotion exclusively set up for the registered Americas Cardroom players for the main reason that big prizes are at stake. In fact, the lone player who will top the tourneys will secure the highest payout of $200,000.

With such a jaw-dropping guaranteed prize for the first place winner, this event easily becomes one that other online poker sites on the Bitcoin gambling scene like SwCPoker.eu and Betcoin Poker long to match or even exceed. 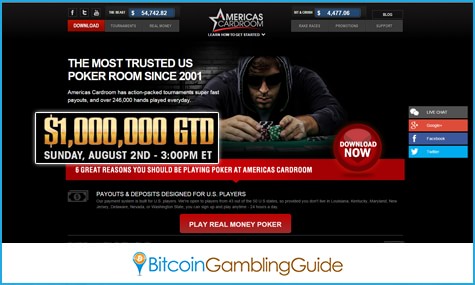 As the first two million-dollar GTD tournaments proved to be a huge success, real-money and Bitcoin poker aficionados on Americas Cardroom are bound for another round with the third Million Dollar Sunday tournament scheduled in August.

Online players will have another opportunity to score their share of the $1 million prize pool on August 2 at 3 p.m. eastern time. Registered members will only need to take note of the date, but interested players who are still unaffiliated with this online poker site must simply download its software client to register an account and gain access to the gambling space provided by Americas Cardroom.

The Million Dollar Sunday tourney in August will follow the same format and will grant the top player with a guaranteed $200,000 as well.

Based from the results of the first two offerings of the said event, the newest special GTD tourney is groomed to become another major hit among US players in the online and Bitcoin gambling domains. 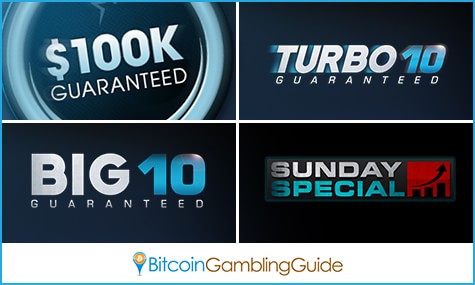 The Million Dollar Sunday is but one of Americas Cardroom’s promotions. It has a wide roster of giveaways, tournaments, and events that are geared to make the poker betting experience more exciting and challenging for all players.

Included in this list is the WSOP Qualifiers where players can win one of the 50 packages to the main event of the World Series of Poker this year. The offer stands all year long, starting from Feb. 22 until June 21 in time for the main event kick off in July.

Meanwhile, poker players can also catch other giveaways like the Sunday Special, Depositor Freeroll, Freerolls On Demand, and many more. There are also talks that Americas Cardroom will hold its $5 Million GTD Million Dollar Sundays tourneys.