The whole Bitcoin community was startled after several online news sites published a few days back the real identity of Satoshi Nakamoto. What was only known before as a pseudonymous name is now a 44-year-old Australian named Craig Steven Wright.

Wright is believed to be the persona behind Nakamoto, but this remains a speculation since nothing is confirmed at this point. The fact, however, that the revelation of Satoshi Nakamoto spreading on the Internet like wildfire is true.

The name Craig Wright became an instant celebrity over night, but not everyone is convinced that he is the man worthy to be called the father, the founder, and the creator of Bitcoin. Whether or not he is indeed Nakamoto, Wright has made significant impacts on the market.

When Dorian Nakamoto was first named to be the man behind the cryptocurrency, the interest in Bitcoin evidently rose. But the enthusiasm soon died down after the alleged ‘Satoshi’ vehemently denied the speculation and the clear lack of evidence.

The same cannot be said about Craig Wright’s outing as Nakamoto. The neighbors’ testimonials, his academic and career background, and even his knowledge of Bitcoin strengthened the possibilities that he could be the one—or at least part of the team—responsible for the rise of Bitcoin and cryptocurrencies.

His superstar status reflects the gravity of the news, and this can be further traced to the upward movement of the Bitcoin price and the markets operating on it.

While it is rather too speculative to associate the Satoshi Nakamoto revelation to the positive performance of the digital currency against the US dollar and other fiat currencies, it is inevitable to notice that the price spiked almost at the same time the news broke out.

The Bitcoin value remained trading above the $400 mark even days after the allegations were first made. It even went past $420 at some point, which would have already excited bitcoiners. After all, the price of the digital currency months back would not have been any closer than that.

This is a factor that hints that the curiosity over Satoshi Nakamoto’s real identity and the veracity of Wright’s persona yields positive results. 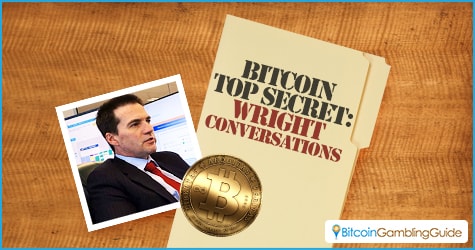 With the increasing price, Bitcoin becomes pleasing to traders who wish to exchange their bitcoins for fiat currencies. The more transactions take place in the Bitcoin world, the more engaging the market would become, especially for bitcoiners in certain sectors.

One of these is Bitcoin gambling. There is no question to the growth of this industry, but the attention Wright’s identity draws in can result in more benefits for the online gambling and Bitcoin casino market.

Going hand in hand with the Bitcoin casino bonus, games, and other exciting services, unmasking Nakamoto’s real persona could largely improve the Bitcoin ecosystem. When this will actually happen, however, remains a question or until a person or a group admits being responsible for Bitcoin’s existence.