This year’s NBA Finals has become a titanic clash of the titans. With the Golden State Warriors coming back from their 3-1 deficit to the Oklahoma City Thunders, they are once again slated to fight their rivals from last year, the Cleveland Cavaliers. When the Warriors faced the Cavs the last time around in the finals, they managed to win and bring home the first championship the team has had in over 40 years. Now, the big question is whether or not history will repeat itself.

This has been a banner year for the Warriors and a win will cap this record-breaking season. First, the Warriors managed to break the best start in NBA history by winning their first 24 games. By then, they had already broken several records by beating some of the best winning streaks in history. Next, they broke the Chicago Bulls’ record of 44 consecutive game wins by reaching 54 wins undefeated. They also broke the most wins in a season by setting a stunning 73-9 record.  Finally, the Warriors became the 10th team to win a postseason series after getting 3-1 deficit and the third to do so in the conference finals. 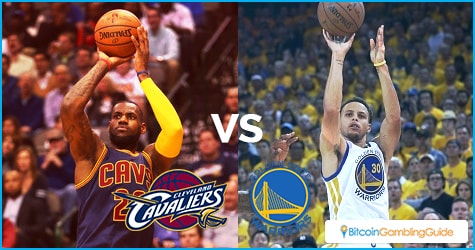 Individual players also managed to be distinctive, namely, Stephen Curry who has been named the NBA’s Most Valuable Player for the second straight season. Curry is the 11th player to win back-to-back MVP honors. He is also the first player in the NBA to be named MVP award by a unanimous vote, winning all 131 first-place votes.

Battle of the best pro ballers

The Warriors have proven themselves as worthy adversaries to the Cavaliers. Right now, the team has three powerhouse players. Stephen Curry is the big name, but Klay Thompson and Draymond Green have managed to prove themselves over the entire season. It would be a statement of fact that if the Warriors did not have these three, they would not have been able to pull themselves out of the hole that the Thunders managed to dig them. In addition, the team has managed to cohere into a well-oiled scoring machine, with emphasis on three-point shots and a solid offensive play.

This does not mean that the Cavaliers will be an easy fight. If anything, the Cavaliers will be hungry for vengeance for last year’s loss and they are the few teams that can deliver. If the Warriors have their power trio, then the Cavs have their own. Lebron James, Kevin Love, and Kyrie Irving have been racking up points the whole season and they will definitely play a big part in this championship series.

Which team is favored for Game 1?

For sports bettors everywhere, this clash between two favorites is going to be a big event. Right now, everyone is betting on the NBA Finals Game 1 on Friday. The consensus from popular Bitcoin sportsbooks like Nitrogen Sports, VitalBet, and Betcoin.ag Sports is that the Warriors are going to win the first game. 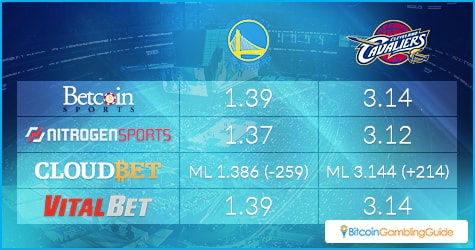 This can be just leftover feeling from the Warriors’ stunning comeback, though. Sports bettors may want to delay betting until the odds have stabilized if they want to get a good payout from betting on the Warriors. Cav fans, on the other hand, may want to place their wagers now. At a 3.1 average, the payout will be profitable if the Cavs win.

That is just the first game, though. A lot of sportsbooks have not placed a bet up yet for who is the ultimate winner since it is still up in the air. Players can expect odds to come out after the first two games. No matter who wins, though, these NBA finals will be the games to remember.