NetEnt’s Guns N Roses slot bested other top games launched this year as it won the Game of the Year award at the EGR 2016 Operator Awards.

Held last Monday and organized by EGR, the EGR 2016 Operator Awards is one of the most prestigious award-giving bodies for the online gaming market. More than 600 industry professionals attended the event, where several awards were given out across different categories, ranging from technology to marketing. 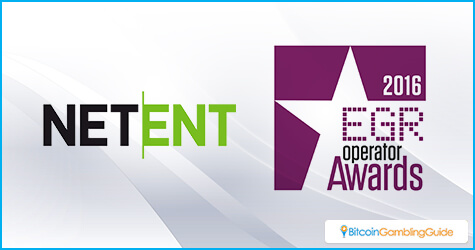 NetEnt is no newcomer to the award. It had won the same award last year for its Spiñata Grande slot game. Per Eriksson, CEO of NetEnt, had this to say about the win:

“It’s an incredible achievement to win Game of the Year for the second successive year and we’re incredibly proud of the achievements of Guns N’ Roses. It has been NetEnt’s most ambitious project to date, so we’re delighted that our hard work and endeavours have paid off. We couldn’t’ be happier to top a really strong field.”

Eriksson was not exaggerating when he talked about a strong field. More than 12 games were part of the ballot, with Playtech contributing two games for the award: Ace Ventura and Space Invaders. Play’N GO, another top developer, had their impressive new slot game Grim Muerto as their chosen candidate. Other nominees for the prize included Realistic Games with their Fireworks slot, Pragmatic Play and their Hot Safari slot, Yggdrasil Gaming’s Monkey King slot, and Magnet Gaming and their The Viking: Wheels of Valhalla slot.

With the impressive competition against it, NetEnt’s Guns N Roses slot had to be special to win the award and it does not disappoint. Developed just in time for the band’s 30th anniversary and is part of NetEnt Rocks The Tour, this Bitcoin slots is a tribute to the Guns n’ Roses phenomenon.

The moment that a player starts the game, they can hear the band’s signature tune “Sweet Child of Mine” play, along with videos of the group at their best. The atmosphere does not let up as the game allows players to choose from five tracks to listen to, including some of the band’s greatest hits: Welcome to the Jungle, Sweet Child of Mine, Paradise City, November Rain, and Chinese Democracy. 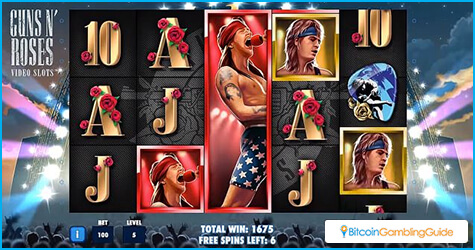 NetEnt’s Guns N Roses slot is not all just about the music. The gameplay is also impressive. The game has the standard five reels and 20 pay lines, but what is really special about it is the bonuses that it offers. For example, when the wild symbol shows up, it can expand to take over an entire reel and can be any symbol, raising you winnings.

The bonus games are also excellent. Players get to spin a wheel that will determine whether you get bonus coins or get to play the crowd pleaser bonus game. This can award players free spins and more coins if they pick the right instruments.