Sit & Go 2.0 still has the same rules in playing a poker tournament. Everyone gets the same amount of chips. The person who won every player’s chips is the winner of the tournament. The unique feature of Sit & Go 2.0 is in how it affects the prize pool of the game. 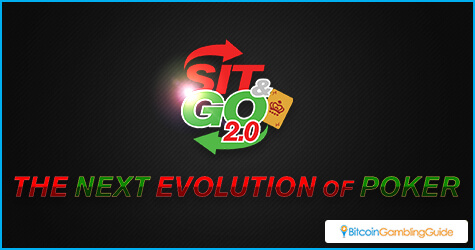 Before the dealer draws a set of cards for each Bitcoin poker player to start the regular poker game, the dealer draws everyone a face down card to start the pre-game mode. Once everyone receives their card, the player to the left of the dealer reveals their card. If the player reveals a red card, the pre-game mode ends. If they show a black card, though, the game continues to the other players until they show a red card.

In a common Sit & Go advised game, the prize pool is set at the beginning of the game. The winner of a tournament will get the amount guaranteed by the game and nothing more.

In Sit & Go 2.0 game at Americas Cardroom, players only know the guaranteed prize pool of the game. Even if the first player shows a red card, the winner is still getting a good payout. However, they do not know how much more they are going to get when they win the tournament.

Hearts are always racing across the virtual table as each player reveals their card. The pre-game mode enhances the excitement of the main poker tournament as everyone aims for the large prize pool.

The pre-game mode of an Americas Cardroom Sit & Go 2.0 game is incredibly easy to understand. Even players who are new to poker are likely to know a black card is what they want and not the red card. Meanwhile, Americas Cardroom offers other online poker tournaments that Bitcoin poker enthusiasts can make the most of.