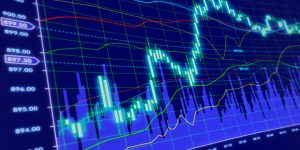 When it comes to the cryptocurrency markets and their inherent high volatility, it is commonplace to become focused on the day-to-day price fluctuations. Often, these can plunge as easily as they can rise, which might be a huge worry for anyone who is only becoming active in this domain, for example, in the role of someone who is getting into bitcoin investment. For some, the changes could be too much to handle which is why it is not rare to see people exit from the markets after only a few stressful weeks of the constant following of crypto prices.

However, experts have a piece of advice for all those who find themselves in this situation or those who are simply contemplating bringing their money to this investment field. Even though the combined market cap of all cryptocurrencies has risen above $100 billion in 2017, the markets must be perceived in relation to their long-term path and its trajectory.

Instead, they risk becoming too caught up in the moment and these can be notoriously problematic for anyone looking to make a long-term gain in this venture. No matter if the sentiment turns to bullish or getting spooked too easily, the results are basically the same: loss of profit and a tensed-up dynamic that is very unpleasant for most of the investors.

To avoid this pitfall of crypto investment, here is a breakdown of the potential future of the markets, especially now when the expected slowdown of the growth finally arrived.

A Focus on Technology, not Prices

The blockchain tech that is providing the means for the crypto markets to exist is revolutionary and there is an industry-wide consensus on that. The ability of blockchain to design and operate distributed ledger systems means that the control of monetary mechanisms is for the first time guaranteed by a non-human entity, along with providing plenty of transparency to the same process.

This is incredible not only for currencies, digital and traditional, but also for many other forms of mass record making. With blockchain, systems that are in existence for dozens if not hundreds of years can now be upgraded and streamlined to a level that is unreachable by any other means. This is the reason why so many individuals, companies and even national central banks are embracing blockchain tech with such frequency and zest.

At the same time, those investing in the crypto market, regardless whether they chose bitcoin or ethereum as the biggest digital currencies, some other form of occurrences or even ICO ventures, place very little emphasis on the same technology. Here, the notion of the technology is basically summarized by the question is the platform which they use stable and secure from potential attacks by third parties. If these are in place, blockchain is basically irrelevant in its potential and capacity.

However, there is a big problem in that form of thinking and it is directly related to the way people lose money in the short term. Metaphorically speaking, it is like observing the phenomenon of a motor vehicle and believing that the most important thing about it are the wheels because they do the actual traveling in relation to the road.

Here as well, the big news is not the current value of bitcoin but the fact that this form of monetary means can successfully exist in the world. In this fact lies the inherent value of the same phenomenon and the key reason people should invest in it. While the prices will change and fluctuate, this sheer innovation value will continue to shape the modern world in the decades to come.

Many investors in the crypto markets get the importance of long-term thinking and the essential role that this tech will play, but they still want to understand what is ahead for the domain. When it comes to the near future, one of the most important factors will surely be the ethereum network.

The growth of the appeal of the ETH cryptocurrency is also very clear in 2017. With only two years since it became operational, the network both had its big crisis and managed to pull itself out of it, even though this meant a split in the network. Now, it is slowly catching up to the market value of bitcoin, even though only six months ago it was miles and miles behind it.

It is not an overstatement to call it the active contender for the top position. Also, once the current slow-down picks up again, there is a certainty that it will pull a lot of money into ETH, especially now with the issue of block size starting up again.

Naturally, there are completely grounded fears in the same crypto community and one of them is the potential for a big sell-off period. Here, the previously mentioned scaling debate is one of the major factors on investors’ minds. The chance of the network forking is heightening sensitivity and with it the chances of going for a big dumping move.

For many traders and experts, the most critical moment will most likely come about at the start of the August. At that particular point, the entire market could see a very unstable period that could involve a big loss across the board, which will certainly fuel any existing problems in the individual networks.

It is hard to see how this would not lead to traders getting spooked and ready to dump a lot of their assets and this way minimize their losses. The effect of this kind of a decision would ripple through the entire crypto domain and bring most if not all digital currencies down by a major percentage.

Reasons to be Hopeful

Naturally, the state of digital currencies is far from problematic, even in the short-term. With the full legal legitimacy finally starting to be attained in places like Japan and with China unblocking its exchanges, the business is booming in the crypto field.

While the summer certainly brings instability of some sorts for bitcoin, which is used by millions for anything from online BTC gambling to blockchain experiments, the trend of crypto ascendance will not stop. This is why the perception of the long-term picture will be the dominant mindset for all those who are going to make it inside of this field.