This year’s Rio Olympics is about to start. For the whole of August, the world will be watching athletes from all over the world compete. One of the more high-profile sports being showcased is football. Considering Brazil’s love affair with the sport, the football events are going to get some particular attention. The city did not even need to build a stadium for it since they already had one.

The Maracanã Stadium was originally built for the 1950 World Cup and has faithfully served as Brazil’s stadium of choice for major football events. With the Olympics in town, it will see a lot of events considering it will be handling both men’s and women’s events.

People’s eyes will be on the men’s division, with over 32 matches planned. With 16 of the world’s best teams participating, the betting action will be fast and furious.

Though the 2016 Olympics are still a few weeks away, odds are already trickling in from some sportsbooks. Currently, wagers on the outright winners are being offered by sportsbooks like BetBaller and Anonibet.

However, bettors can expect to get individual match wagers as the first match dates get nearer. Considering the amount of matches involved, the football events will start two days before the opening ceremony on Aug. 5. As for the favorites, the sportsbooks have picked up on a few.

The top of the list is Brazil. Its odds are set at 1.9 for Anonibet, while BetBaller has a more profitable 2.87. As the host country and one of the world’s best football teams, they will be fighting with a home field advantage. This means that hordes of people will expect them to perform well and even reach the top.

The closest to them of the odds is Argentina, with odds at 4.0 on BetBaller and 6.5 on Anonibet. Another premier team, Argentina also happens to be Brazil’s next-door neighbor, which means they are used to the same conditions. This gives the team a great advantage of being used to the local weather and playing conditions. 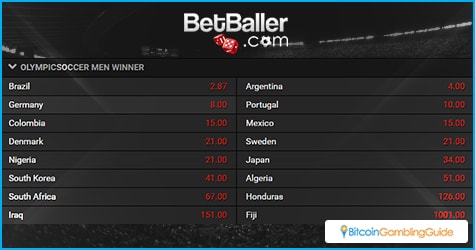 Here are the runners up

Besides the top two players, there are three more teams that the sportsbooks have marked as favorites. Germany is the third favorite in the odds. They are one of the stronger teams out there, with good training. They have a good chance of beating most of the field.

Another favorite is Portugal. After the Portugal team won UEFA Euro 2016, they may want to add another achievement to their year. With its solid reputation, a lot of bettors think that Portugal is strong enough to match the field.

Finally, the real dark horse is Colombia. They are the fifth-place favorite considering their performance in the recent Copa America. They are also another South American country, so they would also be used to the local conditions.

With such good teams competing, football in Rio 2016 Olympics will be sure to see a lot of betting action.