It is almost impossible to not know about SatoshiDice. The mother of all Bitcoin dice sites keeps rolling, and it does not let the competition get in its way. Its over four years in the business solidifies its stand, but there are more to SatoshiDice than being a pioneer of the online dice games many have now come to enjoy.

Starting back in 2012, back when Bitcoin was rarely used for bets, SatoshiDice took the center stage with its blockchain-based dice game. It proved to be too impressive yet simple for an average player, and the ability to place micro bets for every dice roll became an early winner.

Mixing it with provably fair gaming—a verification technology unique to Bitcoin gambling—SatoshiDice quickly earned the interest and the trust of players from anywhere in the world. Fast forward to 2016, the SatoshiDice game everyone has come to love underwent major changes, but without losing the familiar brand of excitement. 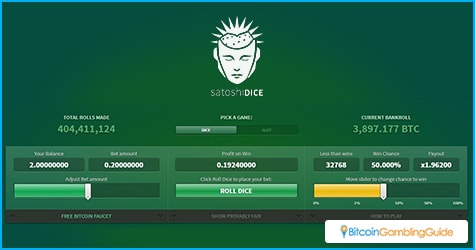 From on-chain to off-chain

SatoshiDice is known for its on-chain Bitcoin dice game, where players directly send small bets to the wallet address of their corresponding preferred bets. This completely bypassed the traditional setting of creating accounts in order to deposit funds and withdraw winnings. With this set-up, this Bitcoin dice betting site guaranteed quick payment transactions and fully maximized the benefits innate to Bitcoin.

In 2013, however, the site was sold for an impressive amount of 126,315 BTC or equivalent to $11.6 million back then. SatoshiDice, under a new management, began to showcase changes that eventually became significant to the dice game at present.

Depreciating the classic on-chain dice game eventually became the next step for SatoshiDice to move forward. It now features a game that lets players adjust the parameters to their choice. In the new dice game, increasing the risk yields higher returns, and this is exactly what players can now opt to on this site.

The switch to the off-chain Bitcoin dice game puts it on the same level as with the other brands, catering to a wider audience who prefer the current dice game on board SatoshiDice.

It was not a smooth ride, though. Over the years, SatoshiDice, which was partly owned by Erik Voorhees, already faced obstacles that challenged its determination to continue and improve. Back in 2013, the site succumbed to a series of DDoS attacks, which had caused it to go offline for several days. The way the site was structured, however, prevented the attacks from hindering the gameplay since the addresses for the betting options for the on-chain game were the same. 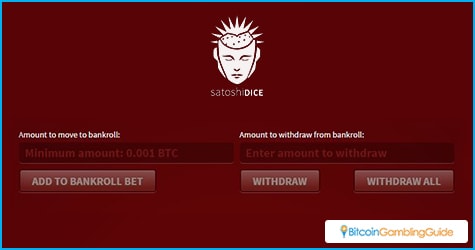 The recent attacks, unfortunately, was a different story. After switching to the off-chain Bitcoin dice game, SatoshiDice completely became inaccessible under the DDoS attacks. This, nevertheless, did not hinder the team to give up. Instead, they pushed forward and brought the site back online with better security and a more stable platform.

After a few facelifts and game changes, SatoshiDice remains rooted in Bitcoin gambling. Although already restricted in the US, the Bitcoin dice site continues to receive a huge following from players across the world.

It’s provably fair dice game with a low house edge is now even better with the Bitcoin faucet that gives out 200 satoshis every minute to all registered players. This, with the affiliate program on board and the option to invest in the bankroll, makes SatoshiDice more than just an ordinary Bitcoin dice online.