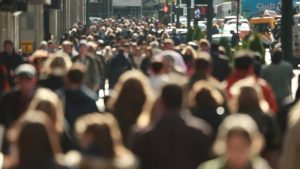 The expansion of the digital currency ecosystem in 2017 has been by now well documented. With many digital currencies, including bitcoin, gaining substantial value in a really short period of time, there is a clear sense of a big change in the financial structure of the world.

While this might sound like an overstatement, but it has to be said that never in the history has a non-national, non-physical commodity/currency managed to acquire so much wealth in such a small time frame. This does not only include a previous couple of months but the entire timeframe since the cryptocurrencies became active.

It is important to remember that today BTC is used for everything spanning from acquiring online loans to visiting online bitcoin casinos, but the entire system is less than 10 years old. From the moment it became active, it managed, more than any other cryptocurrency thus far, to accumulate a huge market value and gather millions of users.

Yet, in spite of this, most of those users are either those who acquired the cryptocurrency in the early days of the network through individual mining or some other venture, or they are wealthy individuals who decided to get into the digital currency domain as a way of diversifying their investment portfolio. Naturally, a big number of companies, hedge funds and other financial and business organization hold digital currency, but when it comes to the actual individual users, the previously mentioned groups seem to still be the dominant ones.

As the digital currency pushes on both in terms of the price and its relevance on the global level, many are wondering when will the big-scale user acquisition begin. Here are some of the facts that shed light on the same issue.

Are End-Users Even Needed?

Ever since the rebound of the 2013 crash which showed that the bitcoin network will survive, there has been a clear-cut need to gather more users. But, this push slowly winded down for many in the digital currency community at the moment when individual mining stopped being viable, which occurred even before 2013.

In the starting years, the basic concept of the P2P network that ran the bitcoin system was to decentralize it as much as possible. The vision of the creators, as blurry as this might seem today, was to provide the public with a system they control through pooling their resources, in this case, their computing power.

But, as the number of hashing nodes in the network grew and the difficulty of the hashing operation rose, regular home computers simply did not have the workload potential to mine coins as a secondary or background operation. Because of this, users started to create rigs for mining that were able to utilize the power of the GPU’s instead of CPUs and provide them with the desired results.

This also did not last, even with the formation of dedicated mining pools. Quickly, the Chinese potential that is well-known today stepped onto the scene with industrial-scale mining and took over most of the hashing power of the network. Other large mines or mine consortiums followed suit.

With this, the idea of an ordinary user running a bitcoin mining operation on their laptop or desktop simply died off. As the process of acquiring, holding and trading bitcoin started to involve more and more fiat money, so did the regular users started to become marginalized.

Today, some in the community are saying that any initiative to generate new end-level users, or people who simply want to employ bitcoin for online gambling, buying of goods or anything similar, is more or less pointless. In any case, the future of the network will be plotted by the influx or exit of big funds, not those coming from the individual users (which will, in any case, stay small by comparison).

The previously mentioned thesis is correct in the sense that for the next couple of years, bitcoin will be a playground for those with large-scale financial means. The digital currency will be bought and sold for a profit, much in a similar manner as other tradable commodities.

However, there is a giant flaw in the idea that a growth in end users is not needed. Regardless of the trading potential coming from wealthy individuals or organization, the end user pool will be the thing that makes the network resistant to outside pressures or open to them.

New cryptocurrency assets will continue to crop up and if the presence of money is the only thing that is beckoning the investors, sooner or later some other network will take their place. It is enough to look at the rise of the Ethereum network and its ether to see that others have what it takes to dethrone bitcoin.

In fact, as the digital currency space diversifies in terms of features and accessibility, bitcoin has everything to lose as the leader of the pack. In this regard, a large user base is the only viable long-term levy that can guard against big shifts in this race.

Like in many other ventures, a big user base is what provides a certain product or venture with stability. It might not be the only factor of stability in the picture, but it is definitely an important one. The same user base protects the venture of sudden shifts that will surely come as the market constantly realigns itself, regularly leading to big changes in the BTC price.

Now, the same changes are not as tangible because they do not impact a large group of people. But, when the same group becomes more numerous, the fallout of trading effects can be a lot more pronounced. Today, bitcoin has greatly changed its reputation from something fringe to something very interesting, but also volatile.

This is not an ideal call-to-action for drawing in ordinary users, but other advantages could become more apparent to them if they are underlined. For this to happen, the development and trading community must exercise their public influence and continue working to bring in more ordinary people into the network. With them coming on board, everyone in the ecosystem will benefit, especially when it comes to the future in front of the bitcoin network.