The NBA Finals are right up there with the Super Bowl and the World Series when it comes to the important sporting events held every year. This year has the Western Conference finals between the Oklahoma City Thunders and the Golden State Warriors, while the Eastern Conference finals have the Toronto Raptors versus the Cleveland Cavaliers.

The first matches of the NBA Conference Finals started last week, with Game 1 and Game 2 quickly being resolved. The Western Conference saw an even split between the Thunders and the Warriors. The first game between them was a close one, with the Thunders squeaking out a 108-102 win. The Warriors came back with a devastating 118-91 second game, though. As for the Eastern Conference, it seemed that the Cavaliers were on easy street. They easily trounced the Raptors in both games.

Led by Bismack Biyombo and DeMar DeRozan, the Raptors came out swinging. The power combo managed to overwhelm LeBron James, with DeRozan delivering the shots, while Biyombo brought the rebounds. Even with Biyombo getting injured by a groin shot, this win may mean the Cavaliers will have a tough fight ahead of them.

As for the Western Conference, the Thunders got the lead once again with two games under their belt. This time, it was a crushing win for the guys from Oklahoma, with a 133-105 score. That is an impressive 28 point difference, with Kevin Durant and Russell Westbrook delivering the goods. This was after the team was galvanized after another foul happening, with Steven Adams being caught by a flailing hit between the legs during a second quarter stumble. This energized the team to gain an overwhelming lead in the third and fourth quarters.

Finals still up in the air

Even with these wins, it is still early days yet to determine the winner. This is especially so for the final game, where the victors of the Eastern and Western Conference meet to have it out.

For one, the Western Conference battle between the Thunders and the Warriors is up in the air as the two teams react to each other’s strategies. Many expect the Warriors to be doing a reshuffle for the next game to catch the Thunders unaware. As for the battle between the Raptors and the Cavaliers, though, the Cavs are the favorite. Sports have had many stories of come-from-behind victories that it would be unwise to discount the Raptors. 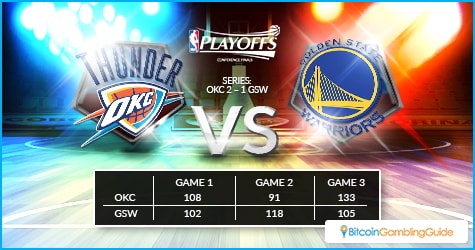 Betting odds are with the Warriors being the overall winner of the Finals, while the Cavaliers are a close second. The odds are not so good for the Thunders, while the dark horse is the Raptors. These odds can change, though, as more games are played.

Players who wish to bet Bitcoin can head over to the leading Bitcoin sportsbooks today or avail themselves of the brokerage services of EastBridge and other similar online bookies.