Keith ‘One Time’ Thurman will be squaring off against Danny ‘Swift’ Garcia on March 4 at the Barclays Center in Brooklyn. This fight is a battle between two undefeated welterweight champions. After the Thurman vs Garcia match, one of them is going home with a notch on his loss record.

If sportsbook odds are a good indication of who is going to win the match, the outlook is looking good on Keith Thurman. 1xBit, a Bitcoin sportsbook, is giving Thurman 1.49 odds while Garcia gets 3.03.

Keith Thurman is a pro boxer with 27 wins under his belt. All of his wins are by knockouts. His success comes from his amazing finesse and punching power.

Ever since he was young, Thurman has the gift when in the ring. The young welterweight champ has much potential and knows how to fight while on the ring. Ben Getty saw this potential in Thurman which is why he took him under his wing at the St. Pete Boxing Club.

One of the dangerous aspects of Thurman is his devastating uppercuts. In most of his matches, his uppers are very accurate and have much power behind it. Thurman is simply a genius when it comes to timing this move.

One Time’s finesse is another thing to look out for. Keith knows how to move around in a small space. His finesse allows him to pull off a counter against another counter.

With odds like BetOnline.ag’s -220 on Thurman, Garcia is going to be quite a struggle against the ‘One Time’ champion. With Thurman’s speed and power, he can run circles around Garcia and just keep jabbing on his face throughout the match. As long as the two does not trade punches at any point of the night, Thurman is sure to take the win.

Danny Garcia has 33 fights throughout his pro boxer career. He won all 33 matches and won 19 of them through a KO. Garcia is known for his devastating left hook. 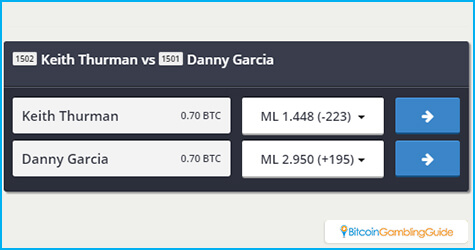 When it comes to speed and power, Garcia is at a disadvantage against Thurman. However, Garcia also has a good grasp on timing his punches. He can even pull off a strong punch with any hand.

When he was against Amir Khan in 2011, Garcia has odds of 7.00. When Khan was at the receiving end of Garcia’s destructive left hook, the tables have turned to Swift’s favor.

On March 4, Thurman clearly has the edge against Garcia as long as there is the distance between the two fighters. But Swift’s left hook just might be all that it is needed for Garcia to change the tide of the battle.

Bettors should start placing their bets in top Bitcoin sports betting site for their favored boxer in this match, just as they did for the Anthony Joshua vs Eric Molina fight in December last year.