This year’s Tour de France is almost over. With four more stages left, the race is on to catch up to Chris Froome. His being the current holder of the yellow jacket means he has the lowest time among all competitors. If he manages to hold on to it, he will be declared this year’s winner. At the Stage 18 already, Froome may just be able to pull that feat off.

The Stage 18 of Tour de France will be from Sallanches to Megeve. One of the shortest stages in the race, Stage 18 is a 17-kilometer track. Compared to the grueling length of other stages, this is a short walk. The difference is that this stage is a time-trial stage. 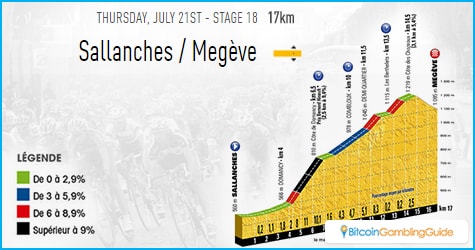 This means that the racers will be competing to see who would get the quickest time. They will be pedaling their hearts out to get to the finish line. However, this will not be as easy as just racing toward the end.

This is because the course is not on a flat surface. The majority stage is an uphill climb. The first two kilometers are an easy run up toward over 14 kilometers of going continually up hill. It is only in the last kilometer that the riders get a break as they slalom downhill.

At its peak, the stage adds 14 kilometers of vertical height to the race. For cyclists, climbing uphill can be a lot more difficult than going the distance. This is because it requires both muscle power and endurance to get up that rise, combined with knowing proper pacing so that the cyclist would not just drop exhausted to the ground.

This is definitely a plus for Chris Froome. Froome, who still wears the yellow jersey, is one of the best climbers and happens to be one of the fastest racers in this year’s Tour de France. If Froome manages to hold on or even expand his lead, he may have this race in the bag.

SportsBet.io has already posted the odds of him being the Stage 18 winner at 2.05 odds. Froome’s closest competition is Richie Porte. Froome’s ex-teammate is an expert in climbing too and can match his challenging speed break. Porte’s odds are a bit close. SportsBet.io has him at 7.00 odds to win the Stage 18, while BetBaller gives him 3.39 odds in the match-up with Chris Froome who is at 1.27. 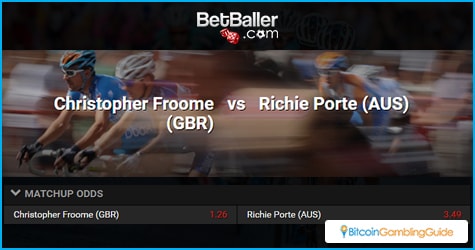 This short and brutal stage is in sharp contrast to Stage 17. It was around 180 kilometers of racing through the Swiss countryside as the athletes started from Berne to Finhaut-Emosson. There were several uphill climbs, but for the most part it was an endurance match. Ilnur Zakarin managed to win the stage, marking his first stage win in the Tour.

Stage 18 will be challenge for everyone. It will be exciting to see the results when the racers hit the finish line.