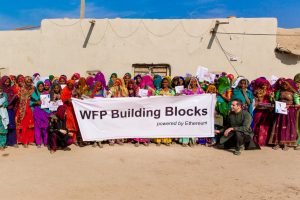 The news might come as a huge surprise for many outside of the blockchain and digital currency communities, but a lot of information points to the UN being in the final phases of the most important blockchain project to date. After UN successfully used ethereum system to send Pakistani rupees to a group of 100 people, the UN’s WFP (World Food Program) is setting up additional security to boost their next stage of blockchain development.

This pilot test should start on May 1st in Jordan when the agency will send an unspecified number of local currency (dinars) to over 10,000 of its recipients in need of humanitarian support and additional food. The goal of the project is to increase the number of recipients to over half a million people by 2018.

The project desires to protect the privacy of the recipients so the exact amount of money provided will not be revealed. To ensure that the system has the needed flexibility to survive the WFP could potentially take out the currencies like rupee from the blockchain, but also any other state-issued currency.

The UN is not the first big organization to begin this process, with entities like the European Union already engaged in it. But, according to Houman Haddad, the WFP CFO, at the moment this organization is paying out in traditional currencies because a lot of places where they recipients live do not accept ether or bitcoin. But, the UN has a plan that could change this on a scale that is practically unheard of until this project.

The test that was undertaken was named Building Blocks and it was a proof-of-concept in which a blockchain was employed to transfer around 3,000 rupees and the same value in food using a transaction series authenticated using the ethereum testing network. This trial lasted 40 days and it utilized a one-time password generated on a random basis.

The same password was received by the aid recipients using their mobile phones. Once they had it, they could use it to attain both food and funds from proprietors in supermarkets who acted as the dispensing party in this arrangement.

When the test is completed, the results of the one-month long trial were placed on the public ethereum testnet and there reconciled with the figure of the actual funds that have been distributed. This way, the project works towards the goal of eliminating the need for the middleman who could somehow rig or cheat the system.

Additionally, the UN does not send money directly to its recipients, but the shops that dispense the food, which can cut out of the process both monetary services like banks and the recipient themselves. Some estimates point to over 100,000 potential beneficiaries that could be serviced by 400 merchants that are working in their area.

Digital currencies like bitcoin and ether are used today for many different purposes cover anything from playing online poker in BTC to getting loans in this cryptocurrency. But now, with the US application in the domain of humanitarian efforts, it looks like the underlying tech of blockchain would be sufficient for the organization to change how it CBT (cash-based transfers) work.

This would mean that instead of employing resources that are perishable like medicine and food, the UN could infuse money directly into the local economy. This means that it could provide the groups that are at risk with things like prepaid cards, mobile money, and vouchers that will be spent domestically.

In 2015, WFP transferred over $680 million in aid to its recipients globally and the UN is looking to raise this figure annually. Additionally, while CBT seems promising the UN is keeping up with rigorous testing and looking for any and all opportunities to enhance the way it functions.

The UN officials believe that the system, as it stands now, still suffers from a range of potential issues, including fees, a lengthy process of contracting and lack of privacy for the recipient, just to name the most prominent ones. But, all of these could be dealt with in a single move which includes moving the transactions to a blockchain network.

That is why the same pilot project is so important to the US and its agency. As it continues to run its course over the coming months, it will be placed on a private version of a ethereum-based blockchain and the eventual goal will be to reach 1 million transactions on a monthly basis. Haddad believes that the moment the system reaches $2 billion mark, the savings on a yearly basis will exceed $20 million. This sum alone could make the difference for a huge range of additional recipients that could be placed on the program all thanks to the blockchain effectiveness.

The Evolution of Donation Mechanisms

Haddad showed three distinctive blockchain benefits. The first one is the process of empowering beneficiaries, the second includes lowering costs and the third one provides a reduction of redundancies in the UN system of services. While previous attempts at this goal were hampered by internal issues like inter-agency competitive interest, the blockchain solution could be able to move the discussion past that point.

Right now, the UN Women agency is in a partnership with the Innovation Norway for the purpose of allowing girls and women easier access to blockchain tech. The same program is right now in the process of hiring a blockchain consultant for the expansion of their efforts. Over agencies is also working on their blockchain-based projects or at least researching its applications.

If the process of blockchain inclusion is successful, the UN could start accepting bitcoin and ether as a form of donor payment. Now, many individuals have expressed a desire to donate ether or bitcoin to the UN but at this moment, the organization cannot accept it. Naturally, the financial elements inside of the organization began searching for ways to make this happen and now, it looks like the blockchain pilot project will be the start of this radical change inside of the UN.