The stage is set for a very contentious US presidential election this November. The Republican and Democratic National Conventions are slated for the end of July and that will start off the election frenzy as campaigning begins.

Considering the US’ position on the international scene, this election could decide who leads the free world. It even has two very contentious candidates: Donald Trump for the Republicans and Hillary Clinton for the Democrats.

The attention paid to the election also makes it an ideal betting event. Although it is technically illegal to put a wager on the results of a US election, this does not mean that it is often heeded. Furthermore, the law that prohibits applies only to US citizens. A lot of online gaming sites allow for people to put a bet on who might win the elections. With Bitcoin, even people from the US can join via anonymous betting.

The main event is the clash between Clinton and Trump. Several betting sites and future markets have already started to accept bets on both candidates. As part of the process, they have posted the odds of each candidate winning. 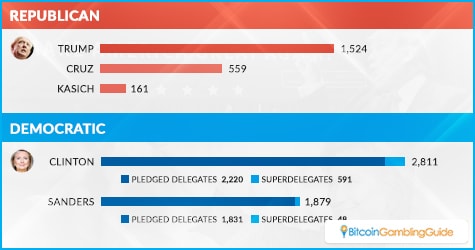 Right now, Clinton is the favorite with odds set at 1.3, while Trump is way down at 3.75. This looks like a pretty obvious win for Hillary, but people have to remember that these are just the current odds. They can shift around as the election nears and the events influence the odds.

There are also other contenders for the position. It is also possible that a third-party candidate or another candidate from the party enters the presidential race. One of the increasingly likely ones is Bernie Sanders.

As Hillary Clinton’s main rival in the Democratic candidate race, he can put himself forward as an alternative. However, he has got pretty low odds at 34.0, a whopping double-digit figure compared to Trump and Clinton’s numbers. Other potential presidential candidates include the Republican Paul Ryan and the current vice president, Joe Biden.

It is not just the presidential candidates that are being bet on. The vice presidents for each candidate are also being considered. Jeff Sessions is the frontrunner for the Republican candidates, while Tim Kaine is being considered for Democratic VP. There are still other choices, though, like Sarah Palin, Newt Gingrich, and Elizabeth Warren.

Betting on the winners

For those interested in wagering on the election, there are a lot of options available. For one, there are the usual betting sites. Paddy Power, a fiat-operated Irish bookmaker, is offering odds, as well as Bitcoin sportsbooks like Nitrogen Sport. 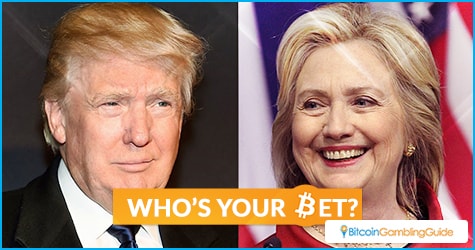 Several other major betting sites will soon follow as the potential for betting becomes more obvious as November approaches. Bitcoin future markets are also available for those who want to bet. BetMoose and Predictious already have shares being offered for a Trump or a Clinton win.

As November approaches, the betting will only get heated. People interested in making a wager should check out the odds now and place their wagers as soon as possible.