People make bets on a wide variety of things. Right now, one of the biggest upcoming events in the US is the presidential election in November. With controversial candidates like Donald Trump and Hillary Clinton in the pool, it is no surprise that this year’s election get all the attention.

People can expect for Bitcoin election betting to become a popular sight on many websites. Technically, the US has laws against this type of wagering. This is mostly because the bets could possibly affect the political process. Bitcoin’s fluid legal status and ability to allow for anonymous bets, however, have made it possible for Bitcoin bettors to profit from this. 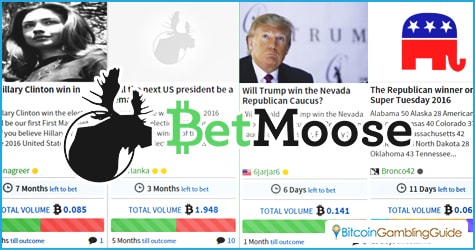 The focus of most bets will be on who will be the winner. Speculating on who will be the next president is a frequent pastime of Internet pundits and armchair political analysts, but having a wager on it adds the possibility of earning some money from a person’s opinion.

Today, several Bitcoin prediction markets like BetMoose and BitBet.us are offering bets on whether a Democrat or a Republican will be winning the election, among others.

Meanwhile, Augur and Fairlay ask direct questions about the projected winner like whether or not Hillary Clinton will emerge as the victor in this year’s race to the highest government post in the US. These Bitcoin prediction markets host several events that cover myriad possibilities connected to this year’s election.

Bitcoin sportsbooks Nitrogen Sports and OneHash may also cover the US election as special events as they have before. 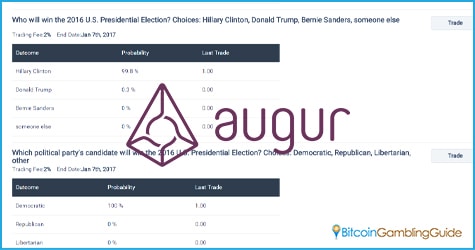 It is not all about the final winner, though. After all, the national election is still months away. What is hot right now in Bitcoin prediction market sites is the betting on the primaries. With Donald Trump making everything a spectacle, the Republican nomination is quickly becoming a circus. Six nominees are struggling for the nomination and this has led to a rather crowded field.

Most of the bets concerning the Republicans are often concerned about how Trump will perform. The first two caucuses are done, with Rubio and Trump in dead heat. The next one will be the South Carolina one and this will be interesting to many. After that, multiple primaries will happen on Super Tuesday on March 1. Bitcoin bettors will most likely be in a frenzy on that day.

The Democratic field has a more sedate betting atmosphere. With only Bernie Sanders and Hillary in competition, it will be like watching a coin toss. Many are projecting a Hillary win, but Bernie’s supporters are also confident.

The US presidential election is a major world event. With Bitcoin, people from all over the world can join in America’s excitement as it chooses its next leader while they earn their share of successful bets.