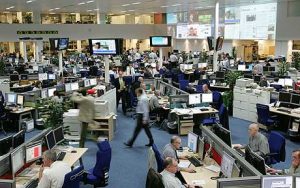 The calls for a substantial change in the media industry, but especially news industry have been growing louder and louder in the previous years. The biggest push back so far from the public came in 2016 when a series of globally-relevant events came apparently from out of nowhere according to the mainstream media. In this category, the form of media engagement was less relevant – it looked like everyone from huge corporations that control a range of channels to small, single outlet companies got their readings wrong for things like US presidential election or the Brexit vote.

At the same time, phenomena like fake news, which is today horrendously misused by a range of factions, became household terms, slowly descending a sort of fog of war on the perception of the global audience. Now, in 2017, the issues of the news media industry are painfully obvious and clearly a big problem for the public.

However, the pressure that is exerted on the media from both outside and inside produced some unexpected positive results. One of these is an initiative to use the ethereum blockchain tokens to disrupt the way this industry works and change it for the better. Here are the details of this project and also an examination where could it lead the industry if it is successful.

The man behind the initiative called Civil is Tom McGeveran, a former member of the Politico family. Now, McGeveran has joined the project that aims to change the manner in which reporters work and interact with their audience. Civil, which is based in New York is trying to encode some elements of the blockchain, ethereum to be more precise, in the functions of the standard newsroom.

Through the use of the token’s smart contract feature, the functions would impact more than one media departments, trying to shape the way circulation, ad sales, subscription and marketing work. The same would take shape as a series of self-executing code that is located on top of the ethereum network. The purpose of this is to cut out the middleman figures of the media bureaucracy.

These are drastically impacting the ability of journalists to work and the audience to attain information they are after; having them taken out of the equation would be very beneficial for everyone else included in the process. This would practically mean having better alternatives open up for journalists and their reports, while the public would be able to reward the stories that interest them the most and also steer the course of future content production by the same media outlet.

Civil currently has plans for an initial coin offering or an ICO later on this year and hopes that this way, individuals in the same media companies would have only a limited oversight of the managerial tasks. The rest of the decisions would be created through the interactions of smart contracts, journalists, and the audience that is following their work.

Using crypto economics is only the means of allowing the audience to “buy-in” into the process of news bureaucracy and day-to-day management. This way, the process would be decentralized and at the same time, be able to reduce the cost of the basic services. The audience would be able to incentivize the journalists to explore their interests and also reduce the ability of third parties of getting into the mix with their own agendas that are often conflicted with that of the overall population.

Another way of explaining this feature of Civic is to paint it as an anti-lobbying mechanism that would curb the power of those with monetary means to influence the news cycle. Right now, this is one of the main reasons why the trust of the public in the media institutions has gotten so low over the past years.

If the project is successful, it would provide any upcoming news outlets with a great option for setting up their business. Similar to the advantages of digital currencies when it comes to getting loans, buying and selling items or even gambling at online casinos, the ethereum blockchain can set up the flow of funding in a quick and easy manner. The savings on the initial costs would be huge, while later on, the upkeep requirements would also be diminished.

When this is combined with the idea of making content that is both more meaningful to the community and more profitable for the news organization, the overall appeal it has is clear. An additional advantage that would be obtained from this approach is the idea of inhabiting the space that is generally overlooked by bigger, mainstream media.

This way, an almost niche-like process of targeted opportunity would be introduced to the media domain. Unlike before, when the same niche was troublesome for monetization, this time around it would come with a fully developed means of attaining not only the needed funds for the projects to be viable but also to become profitable.

Not surprisingly, many figures from the media industry have shown an interest in this venture, but also leveraged their support for its further development. This also shows that Civil and its basic concept have their backers among the very professionals their platform should eventually help.

The first and most daunting thing about the Civil project and any similar venture is the initial coin offering. Right now, it is one of the most used and abused ways of companies trying to cash into the ethereum rise in price and also a way how they can attain capital outside of the regular funding procedures.

While Civic is one of those rare projects that actually have a meaningful reason for doing an ICO, it still could end up being a disaster for them if the majority of tokens are taken by a handful of individuals or even companies. This would immediately impact the entire initiative in a very negative manner because it is a direct derailment of the whole point of its decentralization.

That is why its ICO has to be exceedingly well organized and executed. Instead, the whole initiative could end up being defeated in its purpose before it even really came to the citizens and journalists it aims to empower.