vDice has managed to achieve a lot in the six months of its operation. Regarded as the premier dice betting site for the Ethereum cryptocurrency, vDice.io started with the goal of promoting the cryptocurrency’s use. This may seem a lot to expect from a simple dice gaming, but SatoshiDice, which is the Bitcoin dice site vDice is based on, was once responsible for nearly half of the transaction on the Bitcoin network. vDice may not be as successful as SatoshiDice once was, but it is putting in a solid effort.

The most recent success of vDice.io is the latest crowdsale campaign. When it went live last Nov. 15, it attracted over $1 million in investment in less than 90 minutes. That makes it one of the more successful crowd sales in recent years. 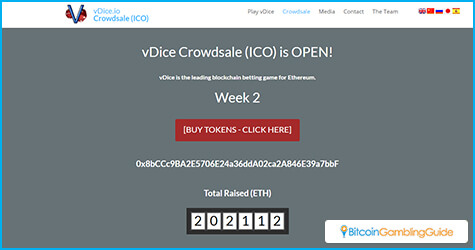 vDice.io now offers vSlice tokens, which function as a tool for people to invest in vDice and share in the profits. They currently sell 100 vSlice tokens for anEther token. With its use of the Ethereum network, the crowdsale automatically distributes the bought vSlice tokens.

The main reason people would buy vSlice is that it is the first profit-earning token produced by the network. When players hold some vDice.io vSlice tokens, they automatically get proceeds from vDice’s profits. This makes vSlice owners investors in vDice, profiting from the site’s success.

With the proceeds from the crowdsale being allocated to vDice’s future development, the site can become even better, which can only attract more customers in the long run. This is good news for those who have managed to get vDice.io vSlice tokens as their profits will increase. For those who are interested in getting a piece of the action, they should act quickly. The supplies of vSlice may soon be gone since it is limited to only 96 million tokens.

vDice has become the go-to site for Ethereum dice gambling for several reasons. Its main feature is its use of the Ethereum network. This makes it the first truly decentralized gambling platform out there and vDice.io developers have leveraged this by adding several useful features that would make gambling on the site easier. 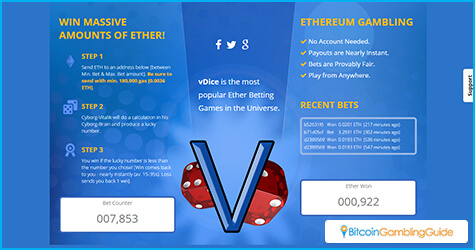 The best feature is that the site allows anyone to start wagering without an account. Players can automatically start when they first visit the site. In order to play at vDice.io, a player only needs to send his Ether to a wallet on the platform and start wagering. The platform processes bets quickly. It takes only a few seconds to place a bet then find out if it gets a win. Combined with the fact that vDice is provably fair, this Ethereum dice betting site proves to be an attractive gambling location.

The team behind vDice has worked hard to succeed and it has managed several milestones. One of these was when vDice sponsored the second Ethereum developer conference in Shanghai. Held last September, the conference showed off the growth of the Ethereum network and how the community could develop the system. The sponsorship meant that the site has become quite profitable and popular.